Share All sharing options for: Updates on the Columbia Heights Diner Project, More! 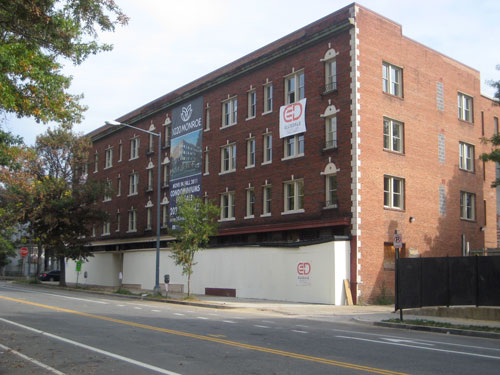 1) Columbia Heights: DCMud gets some good news from Constantine Stavropoulos, owner of Tryst, The Diner and Open City, about his long-awaited diner concept coming to Columbia Heights. They've secured all the necessary building permits and Stavropoulos says he expects to begin construction sometime this week. They're aiming for a 2012 opening date and a potential name for the restaurant is Fishbowl. [PRE-PLYWOOD]

2) Del Ray: The Washingtonian gets a peek inside the two new restaurants joining Pork Barrel BBQ in Del Ray. One is a sushi lounge named Dragon and the other is a ShopHouse-esque fast-casual place named Chop Chop where you can customize your order. The magazine estimates that these are at least a month out from opening. [PLYWOOD]

3) Downtown: An update on Bonmi, the sandwich shop opening in the Golden Triangle district. It's still scheduled to open up in October as originally announced (and, according to Facebook, has already done a menu tasting), but some permitting delays mean that the shop is looking at the week of the 24th. [POST-PLYWOOD]

4) Clarendon: ARLnow takes a look at the construction underway at the first DC-area location of the Lime Fresh Mexican Grill chain. The restaurant is expected to open sometime in November and is applying for a liquor license to serve things like margaritas and sangria. [PLYWOOD]

5) Ballston: ARLnow reports that a place called the Daily Deli is opening up in the old Upper Crust Gourmet Cafe space on North Randolph Street. It will be serving "New York-style sandwiches." [PLYWOOD]