Estadio's Justin Guthrie on How to Deal With Long Waits

Share All sharing options for: Estadio's Justin Guthrie on How to Deal With Long Waits 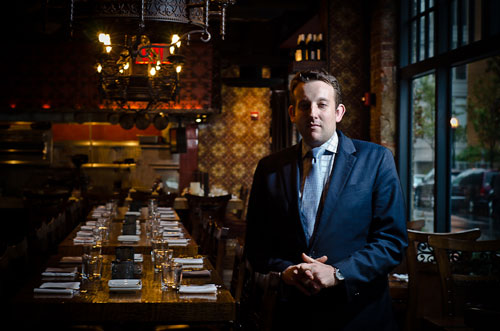 Estadio opened just a little over a year ago in Logan Circle as the second project from Proof owner Mark Kuller and executive chef Haidar Karoum. Not only did the Spanish small plates concept score well with the local critics, but it also turned out diners in droves, which have still not abated. Eater sat down with general manager Justin Guthrie to find out how you can make those notorious waits a little more bearable and why no money will ever be enough money to buy you a table.

Say it's 8 p.m. on a Saturday. What's the wait?
For a party of two, it's going to be about an hour to an hour-and-a-half. For a party of three or more, probably an hour-and-15-minutes to two hours. We give half-hour ranges because it kind of helps us hedge our bets. Some people might get a bunch of plates, eat their meal and go. Others like to linger. So that half hour helps us out, but it turns a lot of people off at the door.

Is there anything I can say or do to make my wait shorter?
No, there's really not.

Has anyone tried to slip you money or gifts?
Yes. Money, never gifts. But I have to humbly apologize so as not to create an awkward situation. I don't want them to feel completely rejected — I still want them to dine here. So I say, "No, we'll do our best to get you seated as soon as possible." I try to keep it as vague as possible. I don't accept it and I won't let my staff accept it either.

So it sounds like it happens a lot.
It's happened enough times that we have a policy on it. I'm sure there's been employees that have taken money and probably worked out something, but the system that we have really doesn't allow it.

When did you first implement the policy?
I think it was something we hadn't really talked about until it happened. It didn't happen to me, initially. It happened to one of my hosts. They were just a good enough employee that they didn't accept it and then they talked to me about it. But I think they probably did it out of self-preservation in the sense that it gets pretty crowded up there and if 20 other people had seen them take money, that entire little mob would have turned on them. It could have just been good, honest employee doing their job, or it could have been self-preservation. I don't know. But that kind of started the ball rolling on the policy.

How much do they offer usually?
I don't know. I see the hand come out and I try not to look down on it because I don't want them to think that they didn't put out enough money because there's no amount of money that'll buy you a table. But I don't want them to try to slip me a 20 and I accidentally look down at it and say, "No, I'm sorry, I don't take money," and then they realize that 40 or 60 could have done the job. Could be 20, could be 5, could be a dollar, I don't know. Could be 100. I maintain eye contact.

And how do you deal with your VIP customers when there aren't any tables?
That's a tricky one. We generally have a good idea when they're coming. We've only had a few surprises. We have a very small list — it's probably only like three or four people — that will get a table if they walk in the door. We could scramble to make that happen.

Who is on that list?
It's probably [owner] Mark [Kuller]'s mentor, [baseball player] George Brett and Mark's wife. But those people never really cash in on that.

What about celebrities?
That's another situation where we have been really lucky because we have had some, but they made reservations because we do take early reservations. So we've never really had to juggle anything for a celebrity or a politician. We've been extremely lucky on that. Again, George Brett is probably the only celebrity... Do you know who George Brett is? He's a Kansas City Royal. He was my childhood idol. I've made the joke before to the staff that if he walked in I would probably pay for a table dinner. Other than that, I don't know. I don't think we do anything too out of the ordinary for celebrities who just pop in.

So can you name any names?
There was a comedian who voiced a very famous Pixar cartoon that came in and knows his food and wine very well. He had a very nice bottle of wine. He was very gracious. Yeah, no, I can't [name them]. I want them to keep coming back. And I try to be as discreet as I can. I try to put them at a table that's not front-and-center. I don't want to show them off. It's neat to have them here. It's exciting for the staff. It's exciting for me. But it sort of compromises the business a little bit if I'm like, "Oh, Dolly Parton was here." She wasn't.

What's the most outrageous request you have been able to accommodate?
There's two of them. One is people fake reservations here. They actually go through the trouble of doctoring up a letter from Open Table with a confirmation number. I assume that they made a reservation at another restaurant at the same time and just put in Estadio. We didn't have them in our books and because I don't have time on a Saturday night to research and call Open Table with this confirmation number and all this, I have to assume Open Table is down. Later I found out it was just a lie. And I had to honor that reservation. And it was a reservation outside of all our limits.

We have people who try to beat the system and they'll make reservations for eight and then they'll show up with 12. That was almost a weekly occurrence and it's gotten to the point where we can make it happen. That happens more often than I care to admit. We're very clear on the phone that we don't have tables to seat more than eight people. There's a reason for this. We're not trying to be difficult and we're trying to accommodate as many people as we can. That's been our goal since Day One. It'd be foolish to turn away people. I think a lot of people genuinely believe that we just want to be cool. The front door here has actually been the biggest challenge of this restaurant. It's just hard to get people off on the right foot when the first words out of your mouth are "an hour-and-a-half to two hours." People's blood sugars are low, they want a drink, they want something to eat and when they think it's going to be an hour-and-a-half to two hours away they get frustrated and that can have a huge impact on how their experience goes for the next few hours.

Is there anything people can do while they're waiting to deal with it?
They can walk around if it's too crowded at the bar. I would recommend having a gin & tonic or a slushie at the bar. Like I said, it's blood sugar. If you can get that first drink in you, an hour and a half goes by much faster. But if you're going to stand and wait, it's going to be a miserable hour and a half, I'm not going to lie. You can order a couple of little bites, levels it out and buys everybody some time. Buys you some time, buys us some time. And by the time you sit down at the table you're going to be ready to eat as opposed to ready to fight.

And how have you seen things change through the year?
Our numbers are consistent if not better than last year. And part of that is actually about how we've learned how to manage the front door and how the kitchen has learned to manage doing high volume. In the beginning we would just collapse. We would do 220 covers and it was like a tidal wave. And now 220 is good for us. We can do 250, we can do more than that. It's not as stressful.

Where do you eat when you're not here?
Two Amys. Always. Once a week for the last four years. I get pizzas, but I never really order anything off their yellow, normal menu. The three people that run the bar there, they're just so awesome. In fact, everybody in this restaurant eats there. Max [Kuller] eats there probably twice a week. We just eat there all the time. That and pho. I don't know what it is. They're consistent, they're good, they're simple, they're not expensive.

What's your favorite pho place?
In the city, 75. I've tried a lot of the ones out in Seven Corners. There's some good ones out there. But time after time, 75, the Arlington one. I live almost in Bethesda, but I constantly drive to that one, at 10 in the morning or 10 at night.

What's the one gatekeeper tool you need the most to do your job?
It's actually my two managers, Max — who is Mark's son and my wine director — and Virginia. Just to be honest, I know my limitations. I'm a tall, imposing man. I can generally tell from 15 feet away if somebody's going to respond well to me or if they're going to feel threatened by me, so I can send one of those two. Max does extremely well with groups of women. If we are having a hard time meeting a quote, if it's getting close, I will send Max in there. Whereas I would have failed in that situation, it's all smiles and giggles and Max is pouring them cava and they're all standing there and they could wait two more hours. So generally Max and Virginia are actually my two best tools. I try to handle as much as I can, but if I think it's not something I'm going to succeed in, I send those two. Then it just becomes negotiation. We all have our own little ways we communicate with a guest about what exactly is happening. This table has paid their check, they've been here for 45 minutes, we don't want to ask them to leave because we wouldn't want to do that to them... we just have different ways of saying it. And people have different ways of hearing it. So I have to make the call if they're going to hear it from the big, tall guy or the sweet boy. That's my most valuable tool.