Bread Furst, Pret a Manger and Much More on the Way!

Share All sharing options for: Bread Furst, Pret a Manger and Much More on the Way! 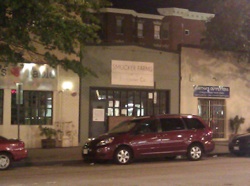 1) Dupont Circle: HuffPost DC learns that the owner of Marvelous Market and Breadline is opening up a brand new bakery on Connecticut Avenue near the Washington Hilton. Slated for late February, Bread Furst will be an American-style bakery (not French) and will serve breakfast and lunch. Beyond bread, there will also be cakes, cookies and pies. [PLYWOOD]

2) Union Station: Prince of Petworth reports that sandwich chain Pret a Manger is headed to Union Station. They've got plywood sheds up covered in lots of corporate signage and someone working on the site tells PoP that they're still a month or so away from opening. [PLYWOOD]

3) U Street: Signage has gone up at the Smucker Farms storefront on 14th Street, as you can perhaps see from this regrettably blurry camera phone photo. The forthcoming farm-to-market store hails from Lancaster County. [PLYWOOD]

4) U Street: Prince of Petworth takes a look inside the well-under-construction future Matchbox location on 14th Street and has photographic evidence of the progress they're making in demolition. [PLYWOOD]

5) College Park: Nycci Nellis hears from Ferhat Yalcin that his new restaurant Fishnet has passed its health inspection and is waiting for one last inspection before it can open to the public. [POST-PLYWOOD]

6) Dupont Circle: Prince of Petworth spots a liquor license application in the old Anna Maria's Italian Restaurant space on Connecticut Avenue that indicates it will be replaced by a tavern called The Board Room. There will also be vintage games and a jukebox. [PLYWOOD]

7) Capitol Hill: Prince of Petworth reports that Gourmet Pizza is headed to Barracks Row. A letter from the owner explains the concept and sets a target opening for springtime. [PLYWOOD]

8) Penn Quarter: Penn Quarter Living snaps a picture of the door to what will become Freshii in the old Gifford's space on E Street and notes that the storefront windows were "very recently papered." [PLYWOOD]

9) Chipotle: Prince of Petworth goes on a Chipotle updating spree, checking up on the forthcoming Mt. Vernon Square, Barracks Row and Cleveland Park locations of the burrito chain. They are in various stages of complete: Mt. Vernon Square is just about done were it not for the handwritten "not open" sign in the window; Barracks Row has plywood sheds up; and Cleveland Park is basically untouched. [POST-PLYWOOD, PLYWOOD, PRE-PLYWOOD]