Updates on Chez Billy, Taylor Gourmet and Much More

Share All sharing options for: Updates on Chez Billy, Taylor Gourmet and Much More 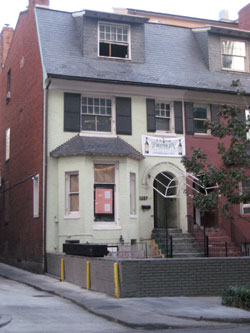 1) Petworth: HuffPost DC gets an update on Chez Billy, the forthcoming French bistro from the Hilton Brothers. After quite a few delays, they've now set a target to open in January 2012 with Brendan L'Etoile at the helm of the kitchen. The restaurant will also have seating for 120 people on the main floor and a lounge upstairs with a DJ on the weekend. [PLYWOOD]

2) U Street: Prince of Petworth snaps some pictures of construction underway at the Taylor Gourmet location coming to 14th Street. Signage indicates that they're hiring, opening soon and advertises for Hellman's mayonnaise. [PLYWOOD]

3) Metro Center: The Hamilton recently posted a whole series of help wanted advertisements on Craigslist, so it seems the Clyde's Restaurant Group's 24-hour restaurant and music venue is well on its way. [PLYWOOD]

4) Columbia Heights: New Columbia Heights hears from restaurateur Jackie Greenbaum about her Mexican restaurant headed to Columbia Heights. It turns out that construction has now started and the place could open in the next couple of months. [PLYWOOD]

5) Dupont Circle: The owners of Bethesda Bagels tell PoP that they've completed the hiring process and are hoping to open on Connecticut Avenue in three or four weeks. [PLYWOOD]

6) Dupont Circle: PoP has a picture of the building that will be home to Irish Whiskey on 19th Street and it is now a very hard-to-miss shade of green. [PLYWOOD]

7) Clarendon: ARLnow reports that construction is moving swiftly at the new Clarendon Trader Joe's and that the grocer is now hiring. [PLYWOOD]