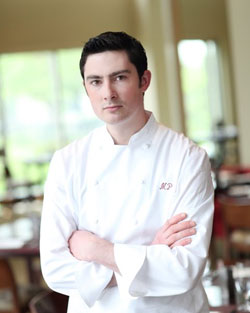 Last night was the finale episode of Top Chef Just Desserts season two, and the good news that was DC's own Matthew Petersen (CityZen/Sou'Wester) made it all the way to the end. The bad news was that he came up short in this episode as his friend and bromance buddy Chris Hanmer took the win. On his post-Top Chef media blitz this morning, Petersen was gracious enough to chat with Eater's Sharon Stirling — a former CityZen stagiaire herself — about last night's episode, what it's like to be filmed all day and why he didn't shit-talk any of his competitors the way most contestants do on these shows.

What did you think of the final challenge? In the episode you mentioned that you were kind of the underdog. Did you think that the other chefs had a bit of a leg up because they had previous competition experience?
Oh most certainly. That style of competition is what Chris has done in his past and that’s what he won as a competitor in 2004 and that was seven years ago. And I know Sally’s done it. She was part of an all-female US team. So as soon as I heard the challenge, I didn’t show it, but I was nervous. It wasn’t what I wanted to do and it wasn’t conducive to what I was good at. So yeah, it was a little frustrating for me.

Thinking back on that challenge is there anything that you would have done differently? A chocolate show piece instead of sugar? Or take a couple components off the plated dessert?
Yeah, I probably would've tightened up the plated dessert to make it easier for me to execute during service time. Cause I feel like I bit off a little bit more than I could chew and there was just too much going on and it started looking like sloppy and just didn't come together the way I pictured it in my mind. Everything else I was pretty happy with. And then the showpiece, that generally just comes down to experience and if I had been making show pieces for the last 10 years it would've looked a lot better. And even if I make one tomorrow it's still gonna look pretty crappy. And that's the reality of making show pieces is it comes down to experience. That knowing what to do, what not to do, certain techniques. When you have a mentor that makes it a lot easier, but alas I have neither. I would love the opportunity to do it again, for sure. But do I hold any regrets? No. I know I put myself out there and I did the best I could with what I was capable of.

How long do you actually get to conceive of the idea for the dish? Once you hear the challenge does the clock start running and you've got however long it takes you to think on your feet and get it done?
Yeah, for the most part. I think we had about maybe 15 minutes of planning, but during that planning time we were choosing our plates. We had to make a shopping list—for the hardware store and for the Whole Foods. And then also to conceive of all the dishes within that time and figure out what you need to go buy for them because you don't have time to think about it. That's the other thing, if you don't have certain things in your back pocket like a showpiece, those other things are going to suffer because you're so concerned with this monstrosity that you have to make but have no idea how to go about.

What was your process for coming up with ideas?
For the dessert I knew I wanted to keep it simple and flavorful. But I wanted it to be fun with lots of different textures and I didn't want there to be a focal point. I wanted it to be kind of all over the place and I think I got that. The bon bon, I've had that idea for a while but I hadn't had the chance to do it so that was the perfect platform and it came out great and everybody loved it. The bread—I did something that I knew how to do. The entremet—I don't make a lot of entremets so that was another thing. I've done quite a few but not as many as Chris and Sally.

You've said nothing prepared you for this show? can you give specifics? How is it different from stress you would feel an hour before service with a prep list still to do?
In a restaurant setting you have more time to prepare. You have staff that knows what you expect. You have other people helping you out. The amount of time that you have to really think about something, trouble-shoot, figure out how it needs to be constructed, is so small. The window of time and the window of ability to make a mistake it pretty much non-existent so from that perspective it makes it really difficult. And then not being able to talk to your family, being in a new kitchen, in a new house, around people you don't know. You've got cameras up your butt all day long. You've got producers up your butt asking questions, telling you to do this, not do that. It gets a little tiresome. For most people it will get the better of them, for others it won't. It's hard to explain and I think that really only people who have gone through it can really understand it.

Talking about having a film crew around, were there any quirks? You go in knowing that you're going to be on a reality cooking show, but were there things that you were completely unprepared for?
No, I think that everything that I kind of expected with regard to that was pretty much true. I mean coming into the bathroom—if you don't shut the door they will push the door open. Obviously if you're using the loo they're not going to come in.

So no secret conversations?
No, no. They would listen to everything and you would know when they were listening because all of a sudden there would be a camera pointed at you. That I thought was funny because I remember a couple instances where I was talking about somebody and you just happen to glance over your shoulder and there's a camera like 20-30 feet away just pointed directly at you. It's just silly cause you know there are other people on the other side of the wall listening to every word and when they said that they meant it, because they were.

Top Chef is known for stew-room craziness, but we didn't see that from Top Chef: Just Desserts.
We weren't all drinking a lot really, not really at all. It was easy for me to stay away from the alcohol in the beginning because I didn't want to get caught up in that. And I think that's where a lot of crazy antics come from. You're sitting in there for hours and hours and you start dipping into the alcohol and that's when it gets a little crazy. Yeah, I don't know, we were a pretty subdued group. I think that we were all just really focused. We had our eyes on the prize and that's it.

I know you, Matthew, and you're pretty opinionated. We've worked in the kitchen together, so I know that you're incredibly professional but you like things done a certain way and if you see something being done wrong you're going to say something. But throughout the show you managed to just stay above it all. What was the strategy in that and how difficult was it?
I think my strategy in that was just to not get caught up in anything other than what was important and if it wasn't important and wasn't directly affecting me I wasn't going to be vocal about it. I also wanted to convey my professionalism and my respect for my colleagues and my craft. And I think it was really important to me to show the level at which I work. And if I was picking everything apart and barking at people, that wasn't really going to make me look good so at the end of the day it was just about being a professional and having respect for people around me. And I think it worked to my advantage. Albeit it was very difficult at times but things aren't easy, you gotta do what you gotta do.

A lot of young cooks and even some chefs have hopes of getting on a reality cooking show; do you have any advice for them?
Be choosy.

Do you think that success hinges on years of experience in the kitchen or is there something to knowing how to play the game?
I think there's a lot to be said for both but I think ultimately it comes down to personality and your level of knowledge pretty much. And how much attention it gets. If you really want to look at it that way. My goal with going on the show wasn't to be a celebrity, more just to prove to myself that “yeah I can do this and also I';d like to win $100,000.” That';s what it was about for me really. It was a blast. I would do it again in a heartbeat and if they do an All-Stars like they did for the original Top Chef I would absolutely love to be part of that.

Well what's next for you? Any take-aways? Learn any techniques that you're going to implement at the restaurant?
I think moreover I just learned more about myself as a chef and as a teacher and as a leader and I think those lessons that I learned were really important to the growth of my career because obviously I don't want my career to stop. I'm always looking for the next best thing. I'm just really excited about the breadth of possibilities that can come from this. I'm gonna focus on what we're doing at CityZen and Sou'Wester so I'm excited for that.