Michel Richard on the Challenges of Running Michel

Share All sharing options for: Michel Richard on the Challenges of Running Michel 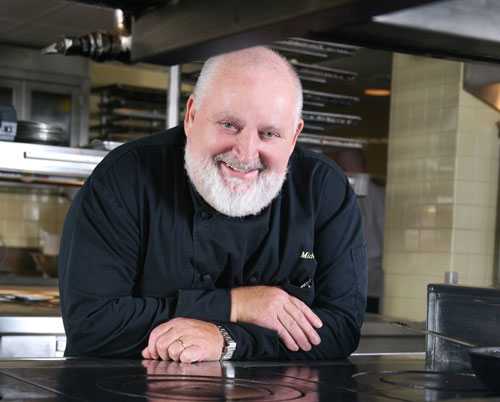 There's been quite the media spotlight on Michel Richard ever since it was first reported that the French chef was opening up a casual meatballery named Meatballs in Penn Quarter. And this news just so happens to be nicely timed with the first anniversary of Richard's Tysons Corner venture, Michel. To some skepticism last year, Richard took over the Ritz-Carlton restaurant that had previously housed Fabio Trabocchi's Maestro — often considered one of DC's cursed restaurant spaces — and opened Michel. Eater sat down for a chat with the chef about the challenges of operating a restaurant out in Tysons Corner, reaction from the critics to a restaurant that was decidedly not Citronelle and Richard's love for his profession.

So how did the concept for Michel come about?
It's very strange. Somebody offered me this place. Location, location, location is good for a restaurant. Being located like Central or Citronelle in the center of Washington is pretty good. And some of my friends called me and said, "Michel, how about taking over the restaurant at the Ritz-Carlton?" "No! Are you crazy? It's out of the way. No." And then a few months later, they called me and I said, "Why not. It's a challenge. Why not." It's fine, it looks good. But the only problem is the accessibility is not too good now.

I had a tough time to find partners, but after a few months we managed to raise the money. This doesn't belong to the hotel. It's my money, we invested our money. We created a beautiful restaurant. You see, when you go to a Ritz-Carlton, you have the Ritz-Carlton look like British lawyer's office. But here it looks more like Michel Richard. The kitchen is open, we show the wine, it's nice and clean, unpretentious. But after one year we still have a rough time because this is like a bedroom community. Most of them they work downtown at night and after being stuck for two hours on the freeway they just want to go home and get out the ice cream. But weekends are OK.

The first thing I did here was trying to create the first menu like a French bistro. Almost like an offshoot of Central. Central is an American brasserie with a very light French accent. Here I tried to do the same thing with a stronger French accent. But people were expecting something like Citronelle's food.

Were you apprehensive about this as a cursed restaurant space?
I'm going to change that! Because the chef who was here before was a wonderful chef, an Italian chef [Fabio Trabocchi]. The name of the restaurant was Maestro. He was a young Italian chef. Wonderful job. But he had a rough time, too. That's why he decided to leave and move to New York. But me, I'm lucky because I have more than one restaurant. I want this one to succeed. I don't like to fail. And we're going to do everything we can. We closed for lunch. Lunch wasn't very busy, and you have competition with the mall. But dinner is OK and we're open for breakfast, too. Here I feel like most of our customers come from the hotel. When the hotel is packed, we're busy. When the hotel is kind of slow, we are slow. I don't know what to do.

We need to create a new kind of restaurant. The quality of food is very, very important. We don't need to create a church. Who goes to a fancy restaurant worried somebody is going to punch your face, "Don't say a word! Be nice!" I try to do a democratization of wonderful food. It should be accessible to a lot of people. When you go to Citronelle it's pretty expensive. Here we try to do something different. Accessibility of any kind of wallet.

What was the design process like?
It's a funny thing. When Fabio and his group Maestro decided to change .... they came to my restaurant to copy the kitchen. They created a Citronelle kitchen lookalike. They built it and so when I took over the kitchen was already there. We invested about $2 million to fix the restaurant. We removed everything. It was just an empty shell. We changed everything. It was very ritzy. Now it's Rich-y. Michel Richard.

I tried to introduce in the food the magic of Michel Richard. We give you something to eat and it's something else, like fake caviar or fake egg. We have a hard-boiled egg that's not an egg. It's made with mozzarella cheese and the yolk is made with yellow tomato. Most of the people they don't even know. You taste that? It's an egg. No! It's cheese! You know, the funny thing about people, they eat the food and they think about something else. You should concentrate on that food that's landing in your mouth.

How was it when the reviews came in from the critics?
So-so. I think the critics were expecting something different like Citronelle. Look, we have no tablecloth, we didn't want to use tablecloths so we could keep the price down. A tablecloth restaurant looks expensive. The reviews were not too great. Richard's rep: The reviews were good. It was 2.5 stars. That's what Tom [Sietsema] gives to casual restaurants. It's not fine dining. It's not four stars. It was a little confusing. I think in people's minds they weren't quite sure whether it was Central, whether it was Citronelle. MR: But some food critics like Tom, they did give us 2.5 stars. But then you go to a fast food restaurant and they have 2.5 stars, too. I think we try to please our guests and they will make good decisions. The press... It was not love at first sight. I open Central and we come up with a wonderful fried chicken. People love it. And here? Can't sell one. It's tough.

What lessons have you learned over the year?
The best location. Location, location, location and super location. That is very important. Even if sometimes it's too expensive, if the location is right it's good for the restaurant.

Another thing I want to say, you have Michel Richard Citronelle in Washington, DC. We have a great name. We have one of the best restaurants in the country. And when people visit DC, I want them to make a reservation at Citronelle. And they do. The restaurant is always busy because we have a national name. It's a great location. Here, even if the restaurant is perfect, most of them stay in DC. "Oh they have a good restaurant, they have a fabulous restaurant in Tysons Corner? It's too far." We are far.

Before I met Jean-Louis, I was a pastry chef. I met Jean-Louis and I spent time in his restaurant and I fell in love with his food. And he injected me with the Jean-Louis drug. I fell in love with his food style. I tried to create dishes. And I did it. I became one of the best chefs in this country. Jean-Louis was deeply in love with his profession. A chef like Jean-Louis, they're not a chef eight hours a day, they're chefs 24 hours a day. That's all you think of. It's in my blood. I say when creating food, I want food to dance in their mouths. Crunchy, good flavor, creamy. I want to create a ballroom inside of their mouth.

· All Previous Editions of One Year In [-EDC-]