Share All sharing options for: Barack Obama Stops Into Liberty Tavern For Dinner

Liberty Tavern got the presidential endorsement last night as Barack Obama (or, more likely, his advance team) chose the Arlington restaurant as the site of the dinner his campaign had raffled off to four winning donors. Owner Stephen Fedorchak tells Eater that the president was in the house for about 90 minutes — apparently lingering over his Portuguese-style swordfish with white beans and lamb sausage. Lyon Hall's Andy Bennett joined Liam LaCivita and his sous chef in the kitchen and together they sent the table an amuse of a house-made Chicago hot dog with pickled vegetables on a poppyseed roll. 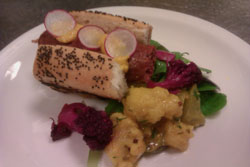 As one might expect, the president's advance team wanted to keep the restaurant as quiet as possible during the visit, so Fedorchak says it was pretty much a population of the president, his four guests, a handful of staff members and "about 35 people performing the various functions that make one of his public appearances work." But, he says, the lean service staff meant that the restaurant's own partners and managers were doing things like waiting on the table: "All the people who have been kicking around since the day the restaurant opened were the ones who actually provided the service because we were like, well, we're going to be there anyway and they don't want anyone else there so we're just going to have fun with it."

Fedorchak notes that he spent 11 years working at the celebrity-packed Capital Grille — Mick Jagger, George Clooney — but this is the first time he's been at a restaurant where a sitting president has dined. And, yes, he's ready for the onslaught of interest that often follows these kinds of presidential public appearances: "It's flattering that the president visited us at all. We want to be respectful in the way we market it. If people want to come to our restaurant and dine there because President Obama did, we're going to try to live up to their expectations."