Welcome to the Plywood Report, where we fill you in on what's coming up in food. See anything — new signage, plywood sheds, etc. — happening in your neighborhood? Drop us a line or send your pictures to dc@eater.com. 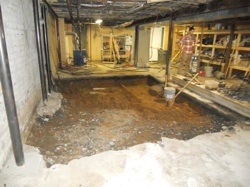 1) Petworth: Prince of Petworth spots some signage for a place called Three Little Pigs next to the fire station and then digs up its Facebook page. The restaurant/butcher will be focusing on salumi and charcuterie, an industry that the website says "is highly underrepresented," but also somehow is totally on trend. PoP notes they're hoping for a November opening. [PLYWOOD]

2) Shaw: A tavern named Inception has applied for a liquor license on Florida Avenue with plans for a pub-style menu, according to PoP. There's also live entertainment, a summer garden and sidewalk seating in the works. [PLYWOOD]

3) Mt. Vernon Triangle: The Triangle has it that an Italian restaurant named Caldo is opening up in the area. A menu on the restaurant's website shows antipasto and classic Italian entrees like lasagna, saltimbocca di pollo, seafood alfredo, tiramisu and more. Chef Alfio Celia pipes in in the comments that they're aiming to open by December. [PLYWOOD]

4) Adams Morgan: Mellow Mushroom is entering the inspection stage this week, which means the opening date can't be all that far away — the goal is mid-October. [POST-PLYWOOD]

5) Adams Morgan: The old Crooked Beats space is turned into a cakes and cupcakes shop called Sweet Themez Cake and Cupcake, according to PoP. The windows are covered, but the signage is up and there's a menu available online. [PLYWOOD]