Share All sharing options for: Erik Bruner-Yang of Toki Underground

All throughout Chinese Food Week, we'll be interviewing the chefs and restaurateurs behind some of DC's favorite Chinese food establishments. Today: Toki Underground. 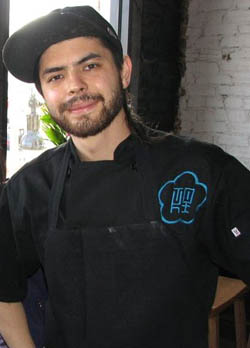 It was just in April that Erik Bruner-Yang opened his Taiwanese ramen shop Toki Underground on H Street, but the restaurant has already gained some serious attention as one of the few spots in DC proper to get Taiwanese-style food. Bruner-Yang recently sat down with Eater to talk about opening Toki, his favorite Chinese restaurants in the area and the state of Chinese dining in DC.

How did Toki Underground come about?
Most of the really good real Taiwanese food is in Rockville, where there's a lot of Taiwanese businesses and grocery stores. That's where the larger congregation of Taiwanese people live. And I have this weird first-generation hybrid version of it at Toki, but basically it's cooking food that I'm familiar with — that my mother cooked, that my grandfather cooked, my grandmother cooked. Growing up overseas in Japan and in Taiwan and the kind of food that I did before opening Toki evolved into this first-generation version of Taiwanese cooking. That's kind of what Toki Underground is.

Tell me more about growing up with Taiwanese cooking.
Everyone's mother's home-cooked meal is always going to be the best meal that they ever had. My mom doesn't cook now as much as she used to, but she's definitely the cook out of her brothers and sisters. My grandfather was probably the main one that taught her. I can't read Mandarin so in our kitchen we have all these bottles and spices and I have no idea what they are. Half the time I don't think my mom really knows what they are. She just knows what goes into what by looking at it. It was great. It wasn't Americanized Chinese food, so when I brought my white friends home they were always like, "What the hell are we eating?"

So when did you begin learning how to cook?
Pretty much when I decided I didn't want to wait tables anymore. I started gravitating toward the kitchen. I was the opening general manager of Sticky Rice and we were so busy when we first opened, so short-staffed, that I was pretty much cooking every day. The problem was that I knew how to do it so I had to do it because we had no one else to do it. And when my grandfather was passing away and I was cooking every day, I was like, I really just want to take the family recipes and go this way with my life.

Have you based a lot of your menu off of family dishes?
Yeah, all the dumplings are family recipes with little tweaks here and there. And especially now I'm definitely gravitating everything toward more Chinese flavors.

What are some of your most popular dishes?
The curry chicken ramen is very Taiwanese and that one is extremely popular. For the first-time customers, they still get the hakata classic because that's something they can relate to, that's the kind of popular ramen right now. But the curry and the kimchi are ramens that were the most popular in Taiwan.

And you do a lot of specials that allow you to get pretty creative with the flavors. How do you come up with that stuff and how does it go over?
We use a lot of whole parts of animals, so we have a lot of things left. And we use really nice quality ingredients. So I feel comfortable selling the chicken butt because it's coming from a free-range organic chicken and it's a really nice piece of butt. And that was from working at Kushi where I learned how to use off cuts. I intentionally made the menu 10 or 12 items because I knew if I just did those things every day, I would go crazy. So the idea was always to have all these specials. We have a lot of regulars that may never have had fried shrimp heads before but they ate the frozen pig trotter two weeks ago, so they're like, "Oh that was really good and there's probably no reason why these fried heads won't be good."

Do you get a lot of expats at Toki?
There's a place in Rockville called Bubble Tea Express and they do a beef noodle soup that's really good. All his restaurant workers came to Toki [a couple weeks ago]. I was about to leave and I decided to hang out because I've never had 15 people that couldn't speak English here just hanging out all night drinking beer. But we get a lot of people that have been to Taiwan or they're married to a Taiwanese girl and they're like, "This is like what it was like when I went and visited her family." Even though I'm still doing this hybrid of Japanese food.

What are some of your favorite restaurants here?
Chinatown Express was really, really awesome when I was in high school. The old Chinese guy was still making noodles in the window. When I want something that makes me feel like I'm at a real noodle shop in a little alley, that's the one you go to. Their off-menu stuff is awesome.

What is off-menu?
I've had fried cuttlefish, soft-shell crab stuff. Sometimes you just look at the Chinese guy next to you and say, "I'll just take what he's taking." That's always the best way to do it.

And then Ming's. They're awesome. They are Taiwanese too. They have a lot of our traditional fried pork cutlet dishes over rice or noodles. It's called pai gu fan, and those are awesome. Scott Drewno from The Source has been coming over to Toki a little bit more now. He's an honorary Asian — a white guy who's Chinese. The Source is awesome, too. That guy makes killer Chinese food.

How about places out in the suburbs? You mentioned Rockville.
I love A&J's. They've got the best dan dan mien. The most traditional dan dan mien. We do one at the restaurant, too, but it's definitely our take on it. Their dan dan mien is awesome. And that shit will put you out for like two days. It's so heavy and amazing.

And how have things changed in the Chinese food scene here since your childhood?
Oh yeah. In seventh or eighth grade we went to the Chinese New Years festival in Chinatown. It really was a Chinatown and it was kind of a hood. It wasn't what it is today with just American restaurants with Chinese signs. Everyone can see Chinatown has changed. And, unfortunately, the ethnic community is getting pushed further and further. But then they find their own little conclaves in places that are important like Annandale. And I think there's a second version of Annandale popping up in Centreville now. So what you're seeing is not really suburban flight, but more maybe like suburban takeover.

And what do you think generally of the Chinese food scene in DC?
It's kind of unfortunate that the highest-quality restaurant is The Source. And it's not even owned by a Chinese guy. I love Scott and everyone loves Wolfgang [Puck], and they definitely do it to a really high level, but that's it. I'm not even there at what they're doing. We're still playing. I could go on rants all day about $4.75 lunch specials and $3.99 lunch specials and that's kind of what Chinese food has become. It's become this joke and it has its own maxed-out price point. People are only willing to pay so much for Chinese food — unless they know they're going to The Source. And Ping Pong, I had never been to Ping Pong before. I was excited about it, but it's definitely there for drinking and they have some food that they steam for you.

So hopefully things will change, but there's just not a lot of money in Chinese food. And all the people that make good Chinese food live in the suburbs. It'll take a first-generation or a second-generation to be like, "I'm going to make what my parents make, figure out a way to repackage it" — kind of like how [New York chef] Eddie [Huang] does. No person fresh off the boat would ever pay $4 for a gua bao, but you repackage it the right way and people will buy it. They don't know what they're eating, but they know it's good.