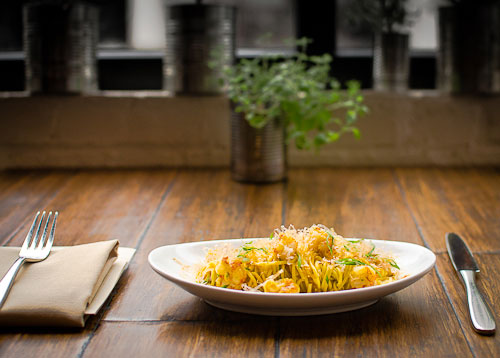 Yesterday we took a look at the Duck and Foie Gras Wonton Soup special that Proof has kindly put on their menu for Eater's first-ever Chinese Food Week, and now it's time for a close-up look at Graffiato.

Having opened up in some prime Chinatown real estate just this past summer, it should come as little surprise that Graffiato chef Mike Isabella's inspiration for his Chinese Food Week dish would come from his neighbors. The dish in question is Rock Shrimp Chinatown-style, made with ginger, chili and noodles. As Isabella explains: "It was inspired by salt and pepper shrimp and by one of our favorite condiments in Chinatown, GGS, Ginger garlic and scallion.  We were debating between salt and pepper shrimp and something with noodles, so we pulled from both and incorporated some of those traditional flavors."

Want to get a taste? The noodles will be available for dinner through November 6 for $12. And stayed tuned to get a peek at the rest of our limited edition dishes from Ripple, J&G Steakhouse, Smith Commons and Watershed.