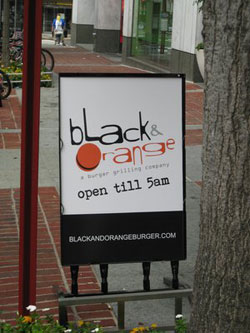 1) U Street: Black and Orange — the burger place formerly known as Rogue States — tells Eater that they're in the final stages of the buildout for the U Street neighborhood expansion. Permits and inspections are running on schedule, signage went up over the weekend, and a rep says the hope is to open before the end of the month, perhaps right after Thanksgiving. [PLYWOOD]

2) U Street: Izakaya Seki, the Japanese restaurant destined for the U Street corridor, has officially applied for a liquor license, according to the Prince of Petworth. He also took a look inside and notes that the property was completely gutted. [PLYWOOD]

3) Adams Morgan: Prince of Petworth gets word from Adams Morgan BID on what's going on at the old Adams Mill location that's been sitting vacant for awhile now. Apparently it will be a restaurant called Southern Hospitality — or SoHo for short — with American fare like salmon and steak. They're aiming for a mid-December opening. [PLYWOOD]

4) Cleveland Park: Citybizlist reports that St. Arnold's has signed a lease on Connecticut Avenue and will open later this month. [PLYWOOD]

6) Atlas District: Frozen Tropics reports that Xclusive Restaurant and Lounge will open on H Street and later notes that the owner listed on the liquor license application was also behind Taste Lounge. The menu will include American, Caribbean and African dishes. [PLYWOOD]