Share All sharing options for: Chef Ryan Kowalski on Cooking For French Diplomats 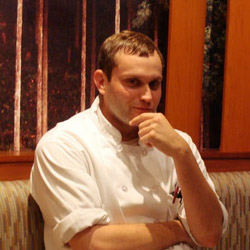 What does a young American with a resume that includes a diploma from Le Cordon Bleu in Paris, a stint at Citronelle, time at two Michelin-starred restaurants in San Francisco, and the executive chef position at Cedar in Penn Quarter do for an encore? Take a job cooking for diplomats from a country renowned for its discerning food lovers. Eater spoke with chef Ryan Kowalski, the chef at the French Minister Conseiller’s residence in DC to find out what it’s like — and where to find a proper baguette in the city.

How did you get this job?
Craigslist. I was thinking about doing a private chef gig for a while. I went to the French embassy and met with them and their prequalifications were you had to know French cuisine which I do, you had to speak French which I do and you have to have working papers which I do. They called me back two weeks later and asked for a tasting. When I came in they had five people here for a lunch and I did a three-course lunch and that was that.

Do you remember what you made?
It was August, so I did a gazpacho with shrimp, trout with chanterelles and carrots and a lemongrass beurre blanc and a warm raspberry tart.

How does the food you cook here differ from what you were serving in the restaurant?
The people that we serve here are a lot of visiting French people. There are a lot of Americans as well, but you have to gear toward the French palate. So peppers, cilantro, raw fish — those don't really work. Modern American food doesn't really work here so that was kind of a big change.

Do you come up with the menu for parties and then bounce the ideas off the minister?
I have a huge template of seasonal ideas and they pick and choose from that. And we [the minister’s wife and Kowalski] tag team on getting ingredients. If she goes to Trader Joe's, I'll ask her to get me this, this and this. Or I’ll go to Whole Foods. I'll buy fish down by the river [at the Southwest waterfront]. And if we need truffles or foie gras we can get it through Chefs’ Warehouse cause they deliver it to the embassy and their residents.

Where do you buy harder-to-find French ingredients?
At the embassy they have a boutique so, for example, wine and spirits we buy there. You can order all these French meats through the boutique and it’s subsidized and tax-free. You walk in and it’s just shelves of products. You don’t touch anything, you have a piece of paper and you write down the number. It’s awesome.

Ever have difficult or unusual food requests?
I can’t use garlic. That was one of their requirements. And I always have to do three hors d-oeuvres, an appetizer, entrée and dessert and they have coffee after that with petit fours. But there’s no cheese course here. The mentality is that the tax-payers of France are paying for it so [the people who come here] don’t want to necessarily be wowed but they don’t want run of the mill stuff that they can get in France.

Have you ever been asked for something you didn’t know how to make and you were forced to do a little research?
They had a birthday party, and I had to do little French desserts. I knew what it looked like, but I’d never made it or tried it. When the minister comes home I have prepared food for him that he reheats. Some of those things are classic French things that as an American you don’t really eat or ever see. Like endive gratin. Blanch it and wrap it in ham and cover it in béchamel and gruyere and bake it. It’s good but it’s ancient.

Where do you find those recipes?
She [the minister’s wife] has provided me with cookbooks. When I first interviewed they gave me a list of what he likes and what you’re not allowed to serve here — organ meat, black olives, meringue. So I know what he likes but, according to the wife, with certain things just because he doesn’t like it doesn’t mean I can’t serve it [at events]. For example, I’m doing a raspberry mousse with meringue tomorrow. He doesn’t like meringue but we’re still going with it.

Where do you go for French food in DC?
Bistrot du Coin is always solid but it’s not gourmet or anything. I’m kind of weird with eating out. I like more Latino or Asian food. French food I can do at home.

The French are known for their fantastic baked goods as well. Do you go to the embassy boutique for that?
They have it there and at the cafeteria they very good baked goods. The wife and I talk about it. Le Pain Quotidien, for example, she doesn’t like. When I lived in France I thought it was good, but now I don’t think it’s that good. Paul, it’s a French chain, there’s one in Penn Quarter. Their baguettes are really good and they have the time on the wall when they produce them. Their croissants are really good as well. I recommend that place.

Was there anything in France that you loved and miss now?
All the charcuterie. A lot of chefs do charcuterie, but rabbit pate things like that you don’t really see a lot here. And if you did would you really want to order it? I don't like to be disappointed.

Most cooks I know have a five-year plan, whether it’s a list of restaurants where they want to eat, where they want to travel, where they want to stage and when they hope to open their own place. What’s your five-year plan?
Originally the goal was to be chef before I was 30 of a reputable restaurant in a big city and we met that goal. So the mentality kind of changed and right now quality of life, once you pass the threshold, things like that become more important. I want to open my own restaurant in a few years, that’s my goal, but it’s not going to be in DC. Right now I’m on a year contract here and I’d like to go work for another embassy and be a chef there, at a bigger one. Now we’re on a tangent if you will. So I don’t really know. I’m enjoying this for right now.