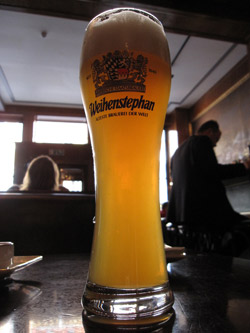 It is a known fact that the temptation to jack a glass emblazoned with the name of one's favorite beer is nearly impossible to resist. But say you're a dude and don't have a purse available for glass-snatching. Where's the next logical place to store your stolen goods? With the family jewels, obviously. In this latest edition of Shit People Steal, Lyon Hall executive chef Andy Bennett shares the tale of of a thief with some serious balls on him:

"Amidst a busy beer fueled Friday night at Lyon Hall's bar, one of our managers, who we'll call 'Andrew Limberg' for short, took the corner to the main dining room only to be stopped dead in his tracks. A 'patron' was busy himself, trying to shove not one but two Weihenstephaner Hefeweizen glasses down his pants.

Now, anyone who can even admit to being able to stash these glasses that hold 20+oz. of beer in his jockeys must have a set, just not a very big set. But, with the utmost display of hospitality, Andrew asks, 'May I help you?' to which the 'guest' replies, 'Uhh, I'll pay for them.' 'Well, they're not for sale,' Andrew says. Now this guy uses the never tiresome line 'I know the owner' — to which we always think the same thing: 'Well, so do I, and I'm pretty sure he hired me to keep people (you) from stealing shit.'

The guy, seeing the error of his ways, and probably two blurry Andrew Limberg's standing in front of him, agreed to return the glasses by handing them back. Here's where Andrew recoils in horror, asks the man to kindly set them down himself, zip up, and hit the bricks."