Scott Drewno of The Source by Wolfgang Puck

Share All sharing options for: Scott Drewno of The Source by Wolfgang Puck

All throughout Chinese Food Week, we'll be interviewing the chefs and restaurateurs behind some of DC's favorite Chinese food establishments. Today: The Source. 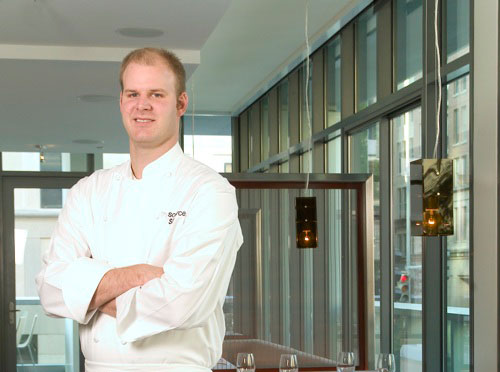 The Source by Wolfgang Puck is considered not only one of DC's best Chinese restaurants, but also simply one of the city's best restaurants. Executive chef Scott Drewno has quickly piled up the accolades in the more than four years since The Source opened in the Newseum complex — perhaps the most vital of these would be the title of "honorary Asian" that others in the community have bestowed upon him. Eater sat down with Drewno to discuss what got him into cooking Chinese food, his favorite restaurants and markets and a recent trip to China — his first.

You got your start in Chinese food in Vegas. What was it that really pulled you in?
I think it was really the ingredients first and the technique second. Having never been exposed to Chinese ingredients when I was younger and then all of a sudden it was like an overload of my senses to have ginger, roasted duck, stir fries in the wok and taste that sort of smoky flavor that you can get from the wok. Those flavor profiles and ingredients were just really fascinating for me. Then once you start to do it more and more you realize it's so in-depth and there's so much to Chinese cooking. It's really fascinating.

And how did you get started with The Source?
Well, I worked for Wolfgang for almost five years in Vegas. I had left the company because my wife got into grad school in New York, so we moved to New York. I never really wanted to leave Wolfgang Puck. I've always really loved working for him. The reason I work for him is he really puts a focus on the food and the service. That's what's most important to him — and quality ingredients, quality products, great service. So I love working for him, and I never wanted to leave, but I'm an East Coast kid — I'm from New York — so I always wanted to be closer to home, too. And my wife got into grad school, so I left the company. Thankfully, Wolfgang came to the East. Prior to that he didn't have a restaurant on the East Coast. And he called me and said, "Move down to DC," and I said, "For sure." And I moved down here four-and-a-half years ago.

So did you do any networking with the Chinese community here when you were opening The Source?
For sure. As soon as I got here it was kind of like, "Where do I find the Chinese ingredients that I need to do the menu that I want to do?" So there was a lot of research and I made some friends at a few restaurants in Chinatown and just asked them, "Hey, where do you buy this? Where do you get this?" That's the great thing about DC, I think, is the restaurant community is really open and they really embraced me personally and whatever questions I had they were really receptive. Everybody in the community has been great. It feels like home here.

So where do you buy ingredients?
Depending what I buy there's a couple of different places that I go. I definitely go to the H-Mart in Fairfax. I probably go there once a week. I also go to a place called Solid Gold Trading in the Florida Market. There's two or three things that I get from them. There's a place called China Boy right up the street that sells fresh noodles. We get our fresh chow fun from them every morning. It comes literally off the steamer into my hands so I have them warm every morning, which is great — which you don't find in a lot of places. It's hard to get that style of noodle fresh. A lot of times it's refrigerated and I think it really diminishes in quality when you buy it frozen or refrigerated. So here literally the bag is warm when I pick it up in the morning. I think it goes back to Wolfgang's whole vision of you buy great ingredients and don't screw them up. So there's a couple different locations that we get different things from. And a few of our purveyors have been really great at sourcing things that I need for the menu.

And what are some of the most popular things on your menu?
The duck, for sure. Most of the dumplings. I think we have nine or 10 different dumplings now and that list keeps growing. I'm struggling now, like, should I take them off and put other ones on? And so now I'm running specials and at certain times we'll have 12 different dumplings. So definitely all the dumplings. Still sort of our signature dish is the crispy suckling pig, which we always sell lots of.

I was talking to Erik from Toki Underground and he told me there's a story about you making fried rice at Ming's. I was wondering if you would tell me the story.
It's a great resource for me, actually. Ming, who is the owner of Ming's, is really this amazing woman. When I went to China, she set me up in a couple of different places. She's been a friend of mine for a long time. When I first met her, I had become a regular there because I really like the food at Ming's and they have some really great dishes. We got to know each other a little bit and she asked me, "What do you do for a living?" And I said, "I'm a chef." And she's like, "Oh great, what kind of food do you cook?" And I said, "Chinese." And she sort of laughed. I was like, "What?" And she's like, "I don't think so." And I said, "Let's go. I'll go in the kitchen right now." And so we went back and we had some fun. She's like, "Oh, you can cook Chinese." So we made fried rice and we had some fun in her kitchen.

Did you compete?
No, no. Ming is a friend of mine. I go there a lot. I'm usually there at least once a week to eat the deep-fried pork chops and a few other dishes I like there.

And what are some of your other favorite places to eat here?
I really love Toki Underground. I hadn't been there until a few months ago and now I've been back several times. I think Erik does a great job and it's a really cool concept and the food is really good there. In general, I definitely hit Proof and Estadio, Graffiato. Since Graffiato opened I think I've gained about 10 pounds. I literally walk by Graffiato every night and it's sort of like a magnet pulls me in there like, "Get a pizza. Get some pasta." I have to make myself walk up 5th Street so I can stop eating so much after work. So I hang out at Graffiato a lot. Chinese food, I go to Oriental East in Silver Spring for dim sum. I go to Mala Tang for hot pot. For Vietnamese I like Present in Falls Church.

Is there anywhere else in Chinatown?
I've eaten at all of them. I think they're all good. Ming's is my personal favorite. I'm not a creature of habit, but I do like Ming's. They offer a lot of unique things and there's a whole bunch of pig intestine on the menu and things I like to eat. I guess I am a creature of habit with Ming's a bit. It's sort of like my Cheers. I can roll in there and instead of serving beer they serve deep-fried pork chops.

And, of course, you just visited China. So what took you so long?
Yeah, exactly. Part of it, I think, is I lived in Vegas for five years and whenever we took a vacation when we lived in Vegas, we would come home and see our parents. My wife and I are high school sweethearts and we're from the same home town, so when you get time off and you live that far from home, you want to go home and see your family. And then we lived in New York and we wanted to travel everywhere. So we've been to Hong Kong and then we went to Italy, France. And finally I just said, "I've got to go to China. It's where I want to be." It was worth the wait, that's for sure.

And since returning you've made some changes here.
Yep, we're actually running a tasting menu now that's inspired by my trip to China, so eight dishes that I saw there. And just a couple small things. I took a cooking class with a Chinese grandmother and learned a few tricks to improve what I've done.

You said in an interview that you notice the difference more between American-Chinese cooking and the real thing. Can you tell me more about that?
One is that there's not a light touch with spice. It's very spicy and flavorful that way. The foods that I had in China, a lot of them were not as sweet as the foods that we had here. I think those were the two things. They're not timid when it comes to spice when you're cooking in China. I think you're just accustomed to eating it that way there, which is really great and refreshing to me. I think food evolves and I think people are evolving with food and understanding that spice is good. Eating a ghost chili pepper, that's a different sort of thing that's maybe not too good at that level. But I think spice in food really adds and makes it interesting and unique.

The Source by Wolfgang Puck