Updates on a Diner, Good Stuff in Crystal City and More!

Share All sharing options for: Updates on a Diner, Good Stuff in Crystal City and More! 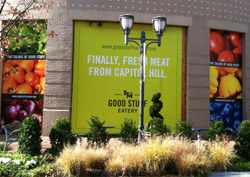 1) Columbia Heights: The Washingtonian gets some more details on what Columbia Heights can expect from the forthcoming 24-hour diner that is being brought to the neighborhood from the folks behind Tryst. More specifically, boozy details. There will be a 22 to 24-person bar with value wines and "a collection of keg wines behind the bar, along with a nitrogen system." There's also going to be a tiny bar in the back for the real cocktail nerds. [PLYWOOD]

2) Adams Morgan: The City Paper has some by-the-numbers details on Southern Hospitality, the restaurant going into the old Adams Mill space that is not affiliated with the New York City barbecue place. The menu will have a "Southern flair" and aims to open around the end of this year. [PLYWOOD]

3) Crystal City: DCist catches some new signage for the Crystal City outpost of Good Stuff Eatery that is scheduled to open in the spring. [PLYWOOD]

4) Petworth: Prince of Petworth has some pictures of the exterior of Chez Billy and has just the following to say: "holy freaking awesome." Looks like things are moving right along. [PLYWOOD]

5) Capitol Hill: PoP notices that Spring Mill Bread is now hiring on Barracks Row and a look at the space inside shows that they must be getting close to opening. [PLYWOOD]

6) Woodley Park: Signage has also gone up at the Noodles & Company destined for Connecticut Avenue, according to PoP. [PLYWOOD]

7) Arlington: ARLnow has some information on the forthcoming William Jeffrey's Tavern, such as that the chef Sam Adkins — formerly of Jackie's and Cashion's Eat Place — is planning an American menu with "homemade bacon, pickles, spice rubs, dressings and mayonnaise." They're hoping to soft-open on December 12. [PLYWOOD]