Share All sharing options for: BLT Steak's Troy Bock on Counting the First Lady Among Your Regulars

Welcome back to The Gatekeepers, a feature in which we roam the city meeting the fine ladies and gentlemen that stand between you and some of your favorite impossible-to-get table. 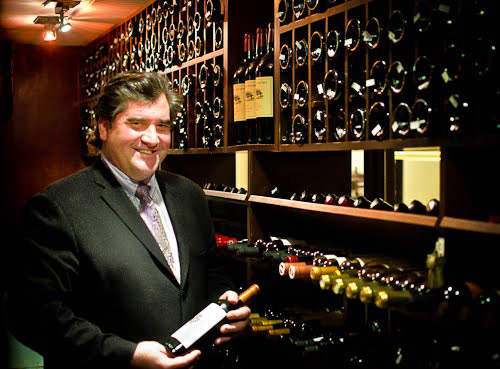 BLT Steak has the ideal location for a power dining restaurant, within blocks of the White House, the lobbyist halls of K Street and all of the firms downtown. So it's safe to say they get a lot of VIPs in these doors. One of these VIPs is Michelle Obama herself, who comes into BLT Steak probably once every other month or so, according to general manager Troy Bock. Eater sat down with Bock to talk about what it's like having the First Lady as a regular and learn BLT Steak's philosophy on keeping their guests comfortable — whether they're VIPs or not.

Say it's 8 p.m. on a Saturday night. How long is my wait for a table?
Without a reservation, I'd say it's probably going to be about 30 to 45 minutes. We don't really hold tables, but we do give two hours between seatings and people can go quickly, people can go longer. We do have a little bit of a window where we can get a few walk-ins in. If you're the fifth person at 8 o'clock it probably won't happen, but the bar is always an option.

Is there anything I can say to make my wait shorter?
We really try to cater to our reservations. If people went out of their way to call and make plans, I wouldn't want them to wait because I put somebody else at a table prior to them.

Has anyone ever tried to slip you money or gifts to get in faster?
Not so much to get in. Afterwards maybe, which is always nice because it means you've made them happy. Not that we went above and beyond because we try that with everybody.

What are the gifts that people bought for you?
It's mostly a nice "handshake." Which is nice. It's always nice. But it's nothing that we are shooting for. It's just doing our job that makes it a good experience for those people.

And given your location, especially being so close to the White House and all these other government buildings, you must get a lot of VIPs in here. So how do you deal with your VIPs when there is not a table available?
I don't think we have a lot of situations where the VIPs don't give us a little bit of a heads up on it. VIPs to us are people that come in as regulars. It doesn't make them more important than the others because they all want to come in and have a good time, but we may just take a little extra look and see that it's not going to be 30 minutes. It may only be 15. Most of the time they're more than willing to wait. There's times when you just have to go, "Honestly, the next table that's going to get up is going to be an hour away." You have to be honest with them. And that's what they want too. So that's the policy we take. It's a double-edged sword. You want to take care of the people that take care of you, but you never know what new guest is going to be your next VIP.

And you've had the First Lady in here as a guest. Can you tell me what that is like?
She's a great guest to have in. She's very warm and pleasant. A lot of the times people will walk in and not realize and she'll be sitting maybe three tables away. Eventually they may figure it out and most of the time she has her table over against the wall by the blackboard and she faces in. But there's been times when she's had some functions in the private dining room and she'll just walk right through the bar and go back there. Somebody might double-take a little bit. But definitely with her we know when she's coming because they've got to go through all the precautionary issues for it.

The one time that was funny is we had her and Alex Ovechkin in. They were literally two tables away. Ovechkin was facing and everybody could see who it was. Not that anybody wasn't paying attention to Mrs. Obama being there, but there was another distraction. A couple of the Secret Service people were like, "We should just take Ovechkin with us because it takes most of the attention off of the First Lady."

He's the one who tweeted the photo and busted her.
Yeah. That being said, she was more than happy to take the photo with him. We have a lady that's worked at security for seven years here in the building and she heard that Mrs. Obama was going to be here for lunch a couple weeks ago and asked if we could get an introduction and everything. The Secret Service warmed up to the idea. So Mary was standing right here as the First Lady came out and she walked right up to her and gave her a hug. She doesn't tend to hide who she is and she's very interactive with the guests. Of course, she can't go and say hi to everybody, but she's been very warm. It's nice to have her in.

So how often does she come in?
I wouldn't say it's once a month, but at least once every other. She comes in with girlfriends or some of her staff and tries to have a normal lunch or normal dinner. It's nice. Chef will come out and say hi and she jokes around with him. We don't try to make pomp and circumstance out of it. She's comfortable. A little extension of the place she has to eat down the road. Maybe going full circle on this whole thing, it's not just for the First Lady. That's the kind of atmosphere we try to create and that's why we get a lot of return guests and VIPs is because they enjoy coming here and it's comfortable and we make it a fun atmosphere for them.

And so what is the most outrageous request that you have accommodated?
We try to be as accommodating as possible and because our menu is a la carte we're able to tweak things in a way that maybe requests don't seem as strange as they may when you have composed plates. I don't think we run into a lot of that and that might just be by the nature of how chefs have put the menu together where we're able to be flexible on a lot of things.

And so where are you eating when you're not here?
Home. I have two boys, one is in high school and one is in elementary school so they keep me pretty busy. If my wife and I get a chance to go out we like going to The Source. We've been there a couple times, that's a nice place. But just raising a family, home is where I eat the most. It's one of those things when you give everything you have to a restaurant for your week, kind of the only place I like to be is the comfort of my home.

What's the one gatekeeper tool you need the most to do your job?
You have to have patience and an understanding that everybody is coming in with expectations and you want to fulfill them as best you can. That's probably the biggest skill you need is to be able to feel people out, make them feel comfortable and be honest with them. It's easy to tell somebody it's going to be 30 minutes and then you don't ever talk to them again for 30 minutes. Because 30 minutes for me can seem like 10 going by as I'm running around. 30 minutes to somebody waiting can seem like an eternity. Also, when we get our VIPs like the First Lady and sports stars is to treat everybody like they're just another person coming in and having dinner. Keep them comfortable and knowing a spotlight's not going to be shone on them.