Cafe Sorriso, Lunchbox and Much More On the Way

Share All sharing options for: Cafe Sorriso, Lunchbox and Much More On the Way 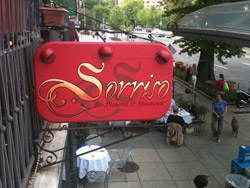 1) Woodley Park: The Washington City Paper has the news about a brand new spinoff of Cleveland Park's Sorriso that is coming to Woodley Park sometime in 2012. Named Cafe Sorriso, the restaurant will be operated by the children of Sorriso's owner and will serve "smaller plates, sandwiches, and organic options" when compared with the original. There will also be square pizza and former Italian embassy chef Roberto Grazioli will also be involved. [PRE-PLYWOOD]

2) Frederick: Bryan Voltaggio's forthcoming Lunchbox officially has a website to call its own and on that website is a menu of the lunch items the restaurant plans to serve. Beyond what they announced in the weeks ago, Lunchbox will have things like peanut butter and banana sandwiches, a Caesar salad with a 63-degree hen egg, alphabet soup and Mexican Coke. [PLYWOOD]

3) Georgetown: The Washingtonian follows up on the meat shop that Jamie Stachowski is opening in the old Griffin Market spot. The space has been fully gutted and is on track to open in January as "a corner candy store for carnivores." There will be a sandwich bar, prepared foods to go and, of course, Stachowski's charcuterie. [PLYWOOD]

4) Union Station: The DC Internationalist also gets a projected opening date, this one from the Pret a Manger destined for Union Station. This one is mid-December with an exact date coming soon. [PLYWOOD]

5) Crystal City: ARLnow reports that a new wine shop — which seems to be affiliated with the Washington Wine Academy — has filed a permit application at the ground floor of the Lenox Club apartment building. [PRE-PLYWOOD]

6) Atlas District: Frozen Tropics catches a tavern license application for a place called Central from the owner of Souk. It will serve Mediterranean-style food with a sidewalk cafe. [PRE-PLYWOOD]