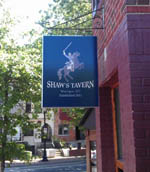 Well, it appears that whole Shaw's Tavern debacle has come its natural end: months after shutting down amid all this summer's drama, the restaurant was finally and totally denied its liquor license application. Advisory Neighborhood Commissioner Hugh Youngblood announced the news on Twitter last night and posted the Alcoholic Beverage Control Board's fact-findings document. If you've got some time to spare, it's a good read that describes allegations of wrong-doing on Shaw's Tavern's part and offers many, many reasons why the board found owner Abbas Fathi "unfit for licensure." And now we wait to see what's going to become of that beautiful space. [Twitter]