David Guas on Bayou Bakery's First Year and the Future

Share All sharing options for: David Guas on Bayou Bakery's First Year and the Future 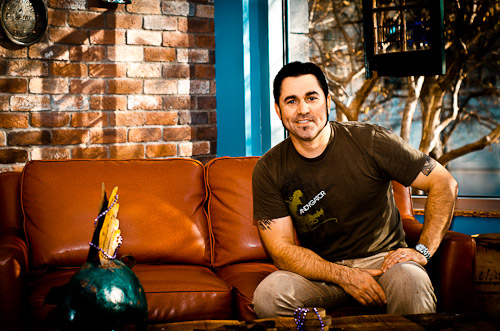 Just before Thanksgiving 2010, one-time Passion Food Hospitality pastry chef David Guas opened his own long-awaited and highly anticipated Bayou Bakery with all the beignets that Courthouse could desire. Now that the Louisiana eatery's first year has gone by, the chef and owner reflects on finding just the right coffee roaster, all the Home Depot runs and his nomination for Food & Wine's Best New Chef competition. And next year? Why, more locations, of course.

How did the concept come about?
Well, being from New Orleans, I've always felt very strongly about the culture of Louisiana. And with that comes the food and the music and the ambiance and the energy that people possess down there. So looking at leaving a large group with a very secure position and thinking what I might want to do that's my own... it was going to have to be different, very different. That's why this sort of casual, all-day concept, you could come seven days a week and get something that would nourish your soul, whether it be just good atmosphere, fantastic food without the fuss [of] the a la carte world of wait staff and pretty plated things, sauces, and using food tweezers. I love it, I'm not denouncing it, but for me this was the ideal form of a restaurant. No fuss, come up to the counter and order what looks good. So I think the concept was always going to be something that was specific to what I grew up with. Then my understanding for coffee grew the last five or six years. I really wanted that to be one of the stages within the restaurant is the coffee program. Yes, it's Bayou Bakery, but its full title is Coffee Bar and Eatery.

What kind of research did you put into the coffee program?
I lined up some of the most respected roasters in the area, some being out of town. Counter Culture was one. We did blind tastings and cuppings. I spent a good year tasting other people's coffee and talking to people in their companies and their roasteries and it really just came down to Counter Culture's showing for the day when we did back-to-backs. It just outshined everybody. Not by much. We have a training center here for Counter Culture, which also was very attractive to me because I didn't have the hours behind the machine to be able to launch my company and to know what I was talking about.

And also how did the buildout go here?
We had a couple unexpected delays, but it wasn't anything major. We opened in the allotted time I gave myself, a date I created based on when I was going to start being charged for rent. You're allotted X amount of time for your buildout and I opened within that time, which is sort of unheard of. But at the same time, I didn't have a huge project. I came into an existing cafe and gave it a really nice facelift. Pulled off the nasty fabrics they had on here and had an upholsterer come in and refabric everything. Picking out a quality, attractive pattern and re-doing the seats. Cutting out the tabletops myself and refinishing them myself. All the shutters were found by me and cut by me and buffed out by me and installed by me. I spent a lot of time in here. If you looked at my budget with the contractor that I hired, every other line item said, "provided by owner." I would run to Home Depot six times a day.

And what were the delays you had?
We had some issues with the county with the signage. Arlington has a reputation for dragging their heels a little bit on signage. We had an issue with the building as far as what was allotted. When they first built this entire building there was something on the docket that said, "Will not have illuminated interior." Meanwhile, Camille's, the restaurant before me in this space had illuminated signage. But when it came time for me they looked a little deeper and saw that was not listed. So I ended up having to eat the time. So our official day of actually charging people was [November] 22nd. Up until the 26th or 27th or after Thanksgiving, we didn't have a sign. Our stencils were done, our window decals were done, but we didn't have the Bayou sign out front. And I wasn't about to not unlock the door just because of my sign.

I understand you started off this concept partnering with the Liberty Tavern. Can you tell me what happened with that?
It's almost two years ago. I don't like to talk about it anymore. When we first opened Bayou Bakery here, a lot of the articles that came out press-wise was all about a "false start" or a "hiccup" in Clarendon, where I was going to open with my former partners. For me, now that we're a year in there's no more false starting. We're open for business, we have been, we've successfully had our year and now we're looking to grow the business. We're looking for more locations.

What kind of looking are you doing? Are you trying to stay in Arlington?
I'm looking not physically, but I'm creating the template of what I need to make this concept successful. I need foot traffic, I need farmers markets in the area, I need Metro accessibility because I know what's proven to be a huge plus with this space. And we're not Clarendon, which is actually a benefit because we don't have people fighting for parking spots, we don't have so much competition down here. Besides myself and Michael Landrum at Ray's the Steaks, we're really the only chef-driven concepts in this area, where the food is truly the focus, not the alcohol or the bar aspect.

So how big of an expansion are you thinking?
Who knows what the future holds? It's like anything. You can't truly begin to provide for your family and for the future and to grow with one concept of this size. My check average is $6. You've got to sell a lot of $6 sandwiches to truly start making it a profitable business. It's like my cookbook. The first cookbook is really a PR thing. You're not making any money on a cookbook. In fact, I still owe money. But you have the thing to check off: I've opened a business, I've written a cookbook. Which is extremely fulfilling in an emotional and a soulful way. So, you know, two or three more would make sense. Maybe a takeoff of this, doing something smaller or expanding the menu and doing something larger with the space but still keeping the fun casualness. Maybe having cocktail waitresses, who knows. I don't know.

When do you think we could expect to see that?
It's going to happen within the next year. Within Year Two would be my goal.

What kind of changes have you made here throughout the year?
Oh my God, that list is long. That's what happens when you're here 80 hours a week, you make on-the-fly split-second decisions that put a new policy into play. I'll give you an example: Simplest thing of visible signage. When we first opened we had this large chalkboard and it was way over there to the right up against that wall so when you got to the register you got a crick in your neck looking at it, you couldn't read it very well. I was re-reading my logbooks from last year and on the 27th or 28th of November it said, "Moved large chalkboard behind the register. Everyone seems to be happy and can read it better." That's why we do notes, so we can look back a year later and see when we did certain things and why we did it. So we can learn from it.

And also this past year you were in the running for Food & Wine's Best New Chef. How was that?
I got a phone call from Food & Wine. It wasn't from Dana [Cowin] but I got an email from one of their executives congratulating me and then giving me all the rules and stipulations and do and don'ts as far as letting it out and making it public. And then I saw the list of chefs I was up against. I think it was at least three locally. Nick Stefanelli from Osteria Bibiana, who is a friend of mine. [Birch & Barley's] Kyle [Bailey] who ended up winning, who I've never met, but I've heard great things about. But yeah, it was fun. A lot of our local customers were behind us and we were getting their vote. We were neck and neck until literally until 24 hours prior to the closing of the polls. I was honored from the beginning, regardless of the outcome. I think people around me were more focused on winning than I was. I wasn't doing anything to win.

So does it feel like it's been a year?
It feels like a lot longer in most respects. Some respects it feels like yesterday we unlocked the door because we're still making some mistakes that no one else would know about. Just business mistakes. From ordering to inventories to just fine-tuning the machine. So in that respect Year Two is about really fine-tuning this machine.