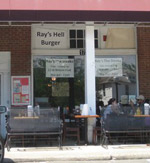 Three masked men robbed Ray's Hell Burger at gunpoint on Thursday around 9:30 p.m. According to reports, the suspects "entered a restaurant and demanded money while brandishing a handgun. They fled through a rear door after receiving cash." Unfortunately, there's little to identify the suspects and the police department couldn't elaborate to ARLnow whether the Ray's location was the original Hell Burger or the recently reopened Hell Burger Too. Scary stuff. [ARLnow]