Welcome back to The Gatekeepers, a feature in which we roam the city meeting the fine ladies and gentlemen that stand between you and some of your favorite impossible-to-get table. 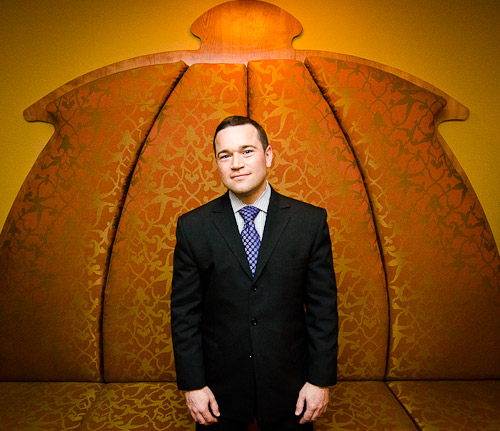 Restaurant Eve is the star of Cathal and Meshelle Armstrong's ever-expanding restaurant empire, and scoring a reservation there is no easy task. The restaurant rests in an adorably small Old Town Alexandria space with both a formal (and pricey) tasting room alongside a more casual but just as in demand bistro. Service director and sommelier Craig Erion shares some tips on how to get a table at Eve, discusses the differences between dining in DC and Alexandria and describes the challenge of keeping your cool when you're the man between hungry people and Cathal Armstrong's cooking.

Say it's 8 p.m. on a Saturday. What would be the wait to get in here?
On a Saturday at 8 p.m. it's almost a given that we're fully committed and we've been fully committed for up to two weeks ago. The prime spots we open the book two months to the day and so if you want to dine at 7:30 in the tasting room, you need to be on the phone two months out. Same thing for the bistro. People do get lucky though. You come in and for two people at 7:00 and we have a cancellation, we'll seat you right away.

Have you ever had anyone try to slip you money or give you gifts to get a table?
I had a gentleman tell me that he would like to "incentivize me." I make it a point not to accept anything before the fact. If you want to tip me for my guidance as far as wine goes, that's great. I provided a service for you and you're showing appreciation. But the way I feel about accepting a tip at the front door is now I have to give you preferential treatment over guests that went through the process of picking up the phone and making a reservation and talking to one of our lovely hosts and learning about the restaurant. Because the experience starts with that phone call.

But do people often try?
No. And I say that because we are not downtown. We're not in Georgetown. We're not on the Hill with a lot of bigwigs. While we do have people like that dine with us, I think to a certain extent they come down this far to get away from all of that. We make it a point not to tell people who's here, whereas some other restaurants in town will make it a point to tell people who's here or who dined here. When the President dined here, we didn't say anything. We weren't calling Tom Sietsema the next day or Eater or The Washingtonian.

Tell me about some of your favorite customers here, some of your regulars?
We have a couple that comes here every Friday. They're on 440-something reservations in the last seven years. Every Friday they dine at table 41 and chef just cooks for them. They haven't seen a menu in years. They celebrate their birthdays here. They celebrate their anniversary here. When they have clients in town or when friends are visiting they bring them here. So there are weeks when they're here two times instead of just the Friday. And if they're going to be out of town on Friday, they'll come in that Wednesday or that Thursday.

We have one gentleman that eats lunch here every single day. He has his spot at the bar. And he'll let us know if he's traveling so we won't hold his seat.

That's dedication.
It's a neighborhood restaurant. Old Town is a neighborhood. And those people that we see every day, they're a part of our lives. They know who my girlfriend is, they know where I'm from, they know all of us because they come in all the time. I think we're a very hospitable bunch. Irish hospitality means you open your home at any given time of the day or night to whoever is there knocking. We take care of our guests that way.

What's the most outrageous request from a guest that you have been able to accommodate?
We had a woman that had a private party and at the last minute requested that we let a friend of hers play the cello. We had people in the dining and we're in the business of saying yes, so we went back and forth and tried to get an idea of how loud a cello is because none of us really knew. So we went back and said, "Can he play softly?" "Absolutely he can play softly." So we had a cello play back here.

Did it end up being too loud?
Yes, but luckily people in that room, the majority of them, were friends of ours or repeat guests. Also once the woman poked her head in and screamed across the room for her server to get back in the room, they realized the person we were dealing with. So it was OK. We got a lot of sympathy votes on that one.

Were there any outrageous requests you have not been able to accommodate?
We just don't get those people. I think they like to stay up in the city. Our guests are pretty tame for the most part, which is good for us. There's always glitches. We had a guest on Friday come in 15 minutes late for their 6:00 reservation and in the book they're a party of four. They show up with five people. We take them back and he says, "Well, we were supposed to be in the tasting room. We made the reservation online." And then he changed his story to say his assistant had called and changed it to five people and when we called to confirm we changed it to the tasting room. Well, when we called to confirm there was no answer, which is clearly marked.

I'm not trying to catch a person in, for lack of a better term, a lie, but I just want to exonerate the restaurant from any wrongdoing and still try to accommodate the guest. That's all I'm trying to do because the guest is getting agitated at this point. So much so that when we're walking back to the table, he stops and puts his hand in my face and starts telling me how it's my fault and how this is unprofessional. Where I come from [in Queens] that's not allowed. Other people are a little bit more tolerant about those things, but as far as I'm concerned if you put your hand in my face then we need to go someplace else and talk about things.

And what's the one gatekeeper tool that you need the most to do your job?
You have the power to keep your cool. You have the power to make sure the guest has an extraordinary time. As soon as you let that power go, you've lost it. And I need to remember that. I need to remember that no matter how angry they are, they're just human beings. As long as I smile, empathize and just keep going with what we do at Restaurant Eve, they're going to have a great time. Just maintain my composure, I guess, is the best tool that you can have.

A lot of people say you need a sense of humor. There's nothing funny about the guy putting his finger in your face. Maybe a month from now or a year from now, maybe we can laugh. But in the moment it's not funny. But you have to keep your composure all the time. You can't lose your cool. Which is very difficult for me. The things that keep me going are intensity and passion for what we do here. It shows on my face.

For more Gatekeepers published today from across the Eater Universe, head over to Eater National.