Chef Thomas Naylor on Being Diplomatic in the Kitchen

Share All sharing options for: Chef Thomas Naylor on Being Diplomatic in the Kitchen 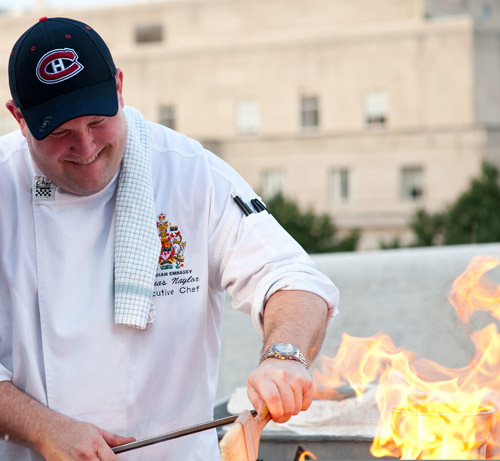 There’s an old stupid joke about yogurt having more culture than Canada, but it will only take five minutes with chef Thomas Naylor to highlight just how incorrect that is. The 10-year veteran of the position of chef at the Canadian embassy allowed Eater to step behind the scenes during a recent event for the Toronto Maple Leafs. He discussed cooking for diplomats and Arnold Schwarzenegger, as well as Canadian culinary delights from caribou to cod cheeks with scruncions. And he shared why the best poutines are the ones you eat when you're drunk.

How did you end up cooking at the Canadian embassy?
?I was working north of Ottawa and I went down for a meal and the chef was telling this story about one of his employees that was going to interview for this job. In the hotel where I was the executive chef I worked 16-18 hour days. Three times in a row I didn’t have a day off for 30 days. Obviously there was no vacation for almost 2 years. It was all about my job — food was my lover. So when this guy told me about this job I thought, "Well, I could pick up any moment and leave." They wanted a Canadian chef. They had a French chef and a Belgian chef and they wanted a Canadian chef to bring the Canadian flavor down.

What was the interview process like?
There was the original phone interview with the executive assistant. Then there was a phone interview with the ambassador’s wife. Then there was clearance interview. Then a face-to-face with the ambassador’s wife. Then they came up to the hotel on the busiest day I ever had. I had 200 people for a graduation, 150 people across the street in the banquet room for a wedding, 18 people for a tasting menu in the basement, 40 people in another room for a buffet. We had three teams going, no one really knew what was going on and I was doing the interview. I sent out five courses each so they got to taste 10 different dishes and the ambassador almost ate everything.

Walk us through one of your days.
I come into work, check my emails. A lot of the finances go through me, and so I have to keep track of it very meticulously. Then usually I'll do daily shopping or shopping for an event. And I have to run the house. Think about taking care of a large house, all the plumbing, electrical, window problems, cleaning, putting up the Christmas lights — all that we have to organize. I'm a manager and managing is the hardest job to ever have. Not only am I an executive chef but I can't yell at anybody. I used to, and it was a really great way to get things done. But now I have to be so diplomatic.

How do you execute the bigger events??
We’ll get together with the lead contacts. Tonight’s event was probably two weeks in planning. Sometimes you go in with an idea and people change their minds, so every chef has to adapt to the situation. I can’t do really last minute stuff because I’m not a restaurant. I don't have the ingredients or the resources at my fingertips to do that. When I do an event [at the embassy] the food that's being served is food coming from the residence to here, so I’m not bringing a piece of fish or a piece of chicken “just in case.” I always make two extra portions. You have to. What if a waiter drops a plate, what then? One person doesn’t eat? You can’t do that.

Who makes the final call on the menus?
I do have someone that I plan things with. They’ll come to me and say, “Can you write us up a menu?” and I’ll write the menu and the estimated cost and they’ll say, “Sounds good.” I’ve been here 10 years so people trust me. The whole thing with a function is that we’ll look at who it’s for. For the media I don’t want to serve caviar and lobster and foie gras, which I really don't use that much anyways.

You do a lot of diplomatic events but you also do cultural events. Do you ever get star-struck?
No, I don’t get star-struck. I did the National Governors Association two years ago. I was shucking oysters and I see on a hand and a ring with the Terminator face with two ruby eyes. It’s Arnold Schwarzenegger. I start talking to him, “Did you try this, did you try that?” And he’s there trying to crack open some crab claws and he wouldn’t look me in the eye, but he said, “So do you cater here often?” And I said, “No, I’m the ambassador’s chef.” And he turns around and he hits my stomach and goes, “I asked for a six pack and you brought me a keg.” I just looked him straight in the eye — he’s not that tall with little squinty eyes — and I said, "I can't believe Arnold Schwarzenegger just dissed me!"

Is the current trend of making your own charcuterie and cheese also prevalent in Canada?
I would say that it started earlier in Canada. Canada is an entry port for a lot of food and entertainment. So the French people in Quebec brought in French farming, foie gras, using a lot of small fowl. Think about the ‘50s here. What was it? Frozen dinners and canned stuff. This place was a culinary graveyard. When I first moved here ten years ago it was crab cakes and steaks. I was like, “I can’t go to another freaking grill place man!”

So what is Canadian cuisine?
It’s kind of the same but not as much Mexican influence. There’s a lot of French influence, Italian, Greek, a lot of Hungarian. And then you have the native aspect. Like using caribou, Saskatoon berries, fat. And muskox. Muskox is kind of like Kobe beef; taste a little similar to it and if it’s cooked properly it’s almost as tender. In the caribou season the caribou will be on the ice and [the Inuit] get on their snowmobiles and hunt. And literally they’ll skin it and hang it and it’ll start freezing right away and a plane will land and inspect it and stamp it, right there on the ice.

And you get the product here?
I used to. I haven’t for a while first of all because it’s $44 a pound, $100 a kilo. It’s one of the most expensive meats other than Kobe beef. But caribou is so great. I’ll also use flavors like spruce tips, literally the tip of the spruce tree. I boil them a couple of times and then pickle them. I’ll take those and chop them up and put them in a sauce. Wild rice with that sauce and caribou with some sautéed foie gras, you can’t get more Canadian than that.

When you meet Canadians in town what do they say they miss the most?
Depends on where they’re from. French Canadians? Things like tourtiere, a meat pie with a very buttery crust. You have to roll it, put it back in the fridge, roll it more and put it back because it’s so much butter that it will start to melt on you. But once you get it in there and it cooks it’s just so flaky it’s incredible. And then you have cod tongues or cod cheeks with scrunchions, which are pieces of pork belly, really small, that have been fried up. Almost like putting bacon bits on cod tongue.

Is the ultimate goal to open your own place?
I don’t want to do it for a while because I love this job but eventually. Definitely in DC or this area. Ideally it would be a small restaurant and then right beside it would be a take-out counter for poutines and Montreal smoked meats. I don’t want to be famous, I just want to cook food that I love. I want to bring small game back and offal, sweetbreads, duck confit.

So what are the steps for making a good poutine?
It’s all in the sauce and the cheese curds. You don't want the shoestring fries, you want a volume fry. It’s got to be the right cheese. People put on these old cheddars and that’s not the way it works. If you can’t take a poutine and pull out a foot-long string of cheese then it’s not a poutine to me. The best poutines were the ones that were delivered late night when you were drunk and it was put into a container with a lid on and sat in there for 20 minutes.