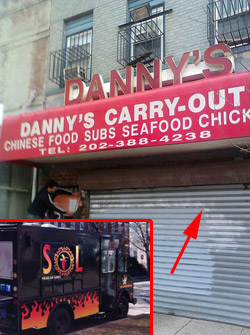 1) Atlas District: According to Frozen Tropics, there's yet another food truck going brick-and-mortar — that is, Sol Mexican Grill has applied for a liquor license on H Street. And, indeed, the name on the application is Fernando Postigo, owner of the truck. Presumably it'll be serving generally the same Tex-Mex menu of tacos and burritos that the truck offers, but also the liquor license indicates a desire for a full bar, summer garden and DJs spinning on the weekends. [PRE-PLYWOOD]

2) Dupont: A Prince of Petworth reader catches some signage for a place named New Orleans Po Boy Shop in Dupont Circle next to the forthcoming Irish Whiskey. [PLYWOOD]

3) Columbia Heights: PoP also has a peek into Le Caprice DC, a new bakery coming to the Allegro building in Columbia Heights. The bakery should open within the next couple of weeks and its menu includes things like croissants, pain au chocolat, brioche, baguettes, eclairs and more. [PLYWOOD]

4) Columbia Heights: New Columbia Heights reached out to the PR behind Z-Burger and gets an update on its opening opens — rather than in a few weeks, as the reports said last week, they're aiming for early-to-mid-February. [PLYWOOD]

5) Columbia Heights: There's also a new liquor license application for a place serving "contemporary American cuisine" in Columbia Heights at 14th and Parkwood. PoP got some shots inside the space, pre-renovation, and apparently it will be called The Pinch. [PRE-PLYWOOD]

6) Eastern Market: And, finally, PoP thinks Eastern Market's Boxcar Tavern is getting close to opening and, to prove it, snaps a photo of the restaurant's interior through a window revealing light wood, nice booths and a street lamp next to the bar. [POST-PLYWOOD]