One Diner Tried to Free PS7's Goldfish at a Holiday Party

Share All sharing options for: One Diner Tried to Free PS7's Goldfish at a Holiday Party 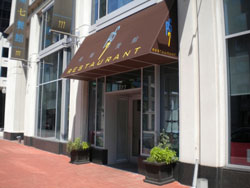 Holiday parties tend to be a bit of a shitshow and so how surprising can it really be that they would also be the scene of a crime? What kind of crime? Attempted kidnapping... of a goldfish. You may have noticed the goldfish that PS 7's once kept in their restrooms as a sign of good luck for the restaurant. Well, manager Sherette Williams recounts the tale of a holiday party a couple of years ago in which a very drunken reveler decided to take it upon himself to go all William Wallace and free the goldfish:

It was right when I first started. I've been there a little over two years now. We have a holiday party, so it was a full restaurant buy-out. The guests were having a great time. It was open bar. With open bar — especially at the holidays — people seem to have a little bit too much sometimes.

We have fishbowls in the bathroom — we no longer have them, at that time we did — and I take care of the fish there. They're my little pets. I make sure that they're fed and they're taken back to the office every night and whatnot. The fish actually are a big concern for a lot of guests. They would make sure that they're properly taken care of. It's a nice attraction.

So there's this one gentleman that had a couple glasses of wine more than he should have and he decided to free the fish, in his mind. He was going to give them the life they deserve. And so he is in the bathroom, he takes the fishbowl down from the hook that it's on and then proceeds to walk around the restaurant with it. And I noticed it and I was like, "Can I help you?" He said, "I just want to give them what they deserve. I'm going to free them. They shouldn't be cooped up in a bathroom." And I'm like, "I understand, but they're pretty well taken care of." I was able to get the fishbowl back and give the fish the life they deserve, i.e. in our restaurant.

There were not [any repercussions for the attempted thief]. He was given water for the rest of the evening. The other guests around, his friends, they apologized profusely. I was like, "It's fine, I just want to make sure that the goldfish are OK and he's OK."

And while the goldfish are currently absent from PS 7's bathrooms, Williams says that the fish will be back — the restaurant is just in the process of buying new fishbowls.