Friends of Eater Recount Their Best Meals of 2011

Share All sharing options for: Friends of Eater Recount Their Best Meals of 2011

As is the tradition at Eater, our closeout of the year is a survey of friends, industry types, bloggers, and readers. We've already covered Top Standbys, Top Newcomers, Top Dining Neighborhoods, 2011 in one word and Biggest Dining Surprises. All will be answered by the time we turn off the lights at the end of the week. Responses are related in no particular order; all are cut and pasted herein. 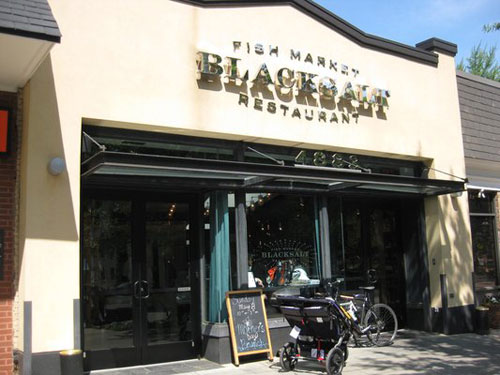 Jeff DuFour, editor, UrbanDaddy: At BlackSalt on March 31. Great food, plus we were celebrating the birth of my son the day before, who was resting comfortably up the road at Sibley.

Tom Sietsema, food critic, The Washington Post: Hands down, the crackling roast pig with yellow rice and pigeon peas at the new! Improved! Mio downtown. The aroma alone sends me to San Juan.

Anna Spiegel, assistant food and wine editor, The Washingtonian: There's a waterman outside Annapolis named Bob Evans who pulls in these heavy, fresh crabs from the Bay. A dozen of those steamed (with his specialty seasoning) are hard to compete with, especially out on the water.

Mike and Elizabeth Bober, editors, Capital Spice: Best meal of the year, hands down, was at Eleven Madison Park in New York. One of our best meals back home was nice and simple: Late Night Oyster Happy Hour with friends at Hank's Oyster Bar in Old Town.

Dan Silverman, editor, Prince of Petworth: I'm gonna get my ass kicked for this but it was at Del Posto in New York.

Rachel Tepper, assistant editor, The Huffington Post: The Columbia Room. I almost don't want to tell people about it — I want to keep it my secret. But, the cat's been out of the bag for a while with this place, which offers a cocktail tasting menu with food pairings. I've had some amazing drinks and dishes here, but I was totally blown away by a foie gras French toast dish with tomato marmalade at a recent dinner. Plus, having bow tied cocktail guru Derek Brown as your host for the evening is a trip.

Mary Kong, editor, Girl Meets Food: Everything I've ordered at Rasika. The artistic way Rasika presents Indian food while staying true to flavors, colors, and aromas is a real pleasure. That sounds pretentious but if you've eaten there, you'll know it's true. Also, the fried fish at Horace & Dickie's because I like tartar sauce in bulk.

Nycci Nellis, publisher, The List Are You On It: My best meal of 2011 was not in Washington but in Baltimore — eek — Woodberry Kitchen.

Chris Shott, food editor, Washington City Paper: The pine-smoked venison with ginger-beer emulsion at Ripple is one thing I can't stop raving about. The cuts of meat were so lusciously red and juicy. And, as much as I typically loathe the foam, the spicy sweet bubbly glop served on the side is a notable exception.

Svetlana Legetic, editor, Brightest Young Things: I had a very special dinner at Komi, and it was, as always as special as one could possibly imagine. But on a semi-regular basis, I always just want to do a little handclap after I eat at Rasika or Oyamel.

Jamie Liu, food editor, DCist: Le Maison Kayser, which is a boulangerie in Paris. It was just a simple breakfast of pain aux cereales, brioche with candied rose petals, and chocolate croissants with really good coffee. It just goes to show how even if food is really basic, if it's executed perfectly it sticks with you.

Missy Frederick, reporter, Washington Business Journal: Man, this is a tough one. But I think I’m going to go with a lunch at The Ashby Inn in Paris, VA. Sweet, complex chestnut soup, an unusual, Asian-inspired take on amberjack with sweet and sour accents, wonderful pate, etc.

Todd Kliman, restaurant critic, The Washingtonian: Just a month ago ... Eating sushi (from Joss, in Annapolis) at the birth center the night my son was born. When my first son was born, almost four years ago, I picked up sushi from Joss and we ate it in the hospital. So we had a neat bit of continuity/symmetry there ... I ordered three bags' worth, which was too much, but in order to be festive you have to have some degree of excess. And I got to share that excess with the terrific nurse, Katya — feeding her yellowtail in between her tending to my wife and son. ... We also opened a bottle of Pinot Noir I'd been saving ... The two restaurant meals that stand out amid a slew of lunches and dinners: one at Fiola and one at Eola.

Kelly DiNardo, freelance writer: Dinner at Little Serow. Eggplant salad, salted mackerel, pork sausage wrapped in basil, wagyu brisket with a duck egg and pork ribs with crispy garlic. The layers of flavors were impressive. The staff might be the friendliest in the city and the playlist absolutely rocks — Fitz and the Tantrums, The Pipettes. It's a happy restaurant.

Jessica Sidman, dining editor, Bisnow Media: My first bowl of Kimchi Ramen at Toki Underground. The broth is insanely flavorful, the noodles have just the right amount of bite, and I'm obsessed with the half-cooked egg mixed in. Top it off with some freshly-baked almond cookies, and it's perfection.