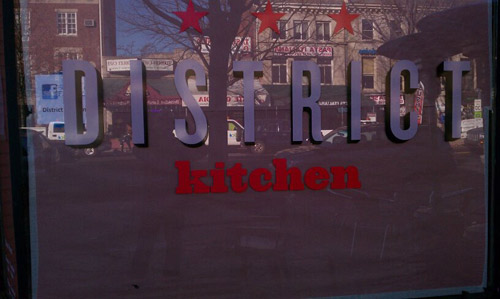 1) Woodley Park: This week, both The Washingtonian and the City Paper checked in on the progress at District Kitchen, which has seen some delays but hopes to open up by Christmas. The facade has been repainted, the signs are up, the health inspection is this week and chef Drew Trautmann is hard at work on the opening menu. [PLYWOOD]

2) U Street: The newest Taylor Gourmet location is humming along on 14th Street and they are hosting some hiring open houses this week, according to Craigslist. A rep for Taylor Gourmet tells Eater they're shooting for a January 2012 opening. [PLYWOOD]

3) U Street: U Street Girl notes some progress at the forthcoming Piola location: a window and a door! [PLYWOOD]

4) Adams Morgan: There is also some hiring underway at Mintwood on Columbia Road, specifically front of the house positions. [PLYWOOD]

5) NoMa: Frozen Tropics brings word that the space in the Loree Grand that was intended for Kitchen on K will now be home to an Italian restaurant called Zuppa Fresca. It should open on February 1. [PRE-PLYWOOD]

6) Atlas District: Yet another restaurant bound for H Street NE. According to Frozen Tropics, there's a liquor license application up for a spot named Chicken Tortilla — presumably an expansion of Eastern Market's restaurant of the same name — on H Street. [PRE-PLYWOOD]

7) Dupont Circle: There's also another Crumbs Bake Shop destined for the District, this time to Dupont Circle in the old Schakolad space. Prince of Petworth spots the permit in the window.

9) McPherson Square: Also, PoP learns that there's another Pret a Manger location coming to DC, this time at 15th and K streets for all the downtown worker bees. [PLYWOOD]

10) Ballston: Arlnow has it that the Ballston location of the Greene Turtle is near completion and should open between Christmas and New Years. [PLYWOOD]