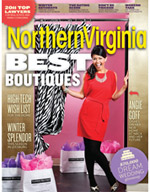 Northern Virginia Magazine has officially named Stefanie Gans as their new dining editor, replacing Warren Rojas, who left for Roll Call back in September. You may recognize Gans' byline as a freelance writer for the Washington Post, Washington City Paper, and a rock star contributor to this very site. One can only hope that the powers-that-be at the glossy will allow Gans continued liberal use of the swears. She gets started there on December 12. Congrats! [EaterWire]