Tiffany MacIsaac, one half of Birch and Barley's husband-and-wife chef team, was on WAMU's Kojo Nnamdi Show this afternoon to discuss her and hubby Kyle Bailey's home-brewing hobby. Here's what happened: 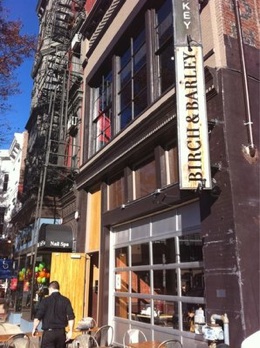 — Bailey was the one who got his wife into home brewing — and, in fact, into beer at all. "It's probably sacrilege to say that I used to think I didn't like beer," MacIsaac said, adding that it was only because she had never had good beer before meeting Bailey. And now, she says, she's the one in the family with the more discriminating taste.

— MacIsaac says that being chef helped in learning how to home brew, having already learned about how yeast and infusion work. But she added that "it's all trial and error" and noted that it took her five years to move from following recipes to making them when she first started baking.

— Home kits are also a good gateway to brewing, MacIsaac said, again comparing them to her own evolution as a pastry chef: While she and her mother used to bake brownies from a box, she now makes them from scratch.

— And, in case you're ever sitting next to MacIsaac at ChurchKey, keep in mind that the chef prefers stouts and tart beers — light on the hops, please.