Welcome to Eater in the Embassy, where we ask the chefs behind DC's diplomatic receptions and events about what it's like working in an embassy kitchen and their favorite places to eat around the city. 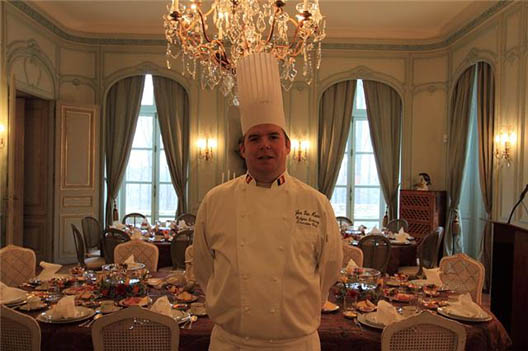 We're kicking this series off with Jan Van Haute, the 30-year-old executive chef at the Embassy of Belgium. A native of the picturesque Bruges, Van Haute has already made a name for himself in his just slightly more than two years working in DC. He won last year's Embassy Chef Challenge and is part of a close-knit group of Belgian chefs in DC. Van Haute told us about the DC Belgian cuisine scene, how to drink beer properly and his favorite restaurants — local and beyond.

How did you become an embassy chef?

I worked like 10 years in Belgian restaurants. I love traveling. I've been a year on a trip, I've been six months in Australia, where I worked, and then I've been in Japan several times, in a two-star Michelin restaurant in Japan, learning the classic Japanese cuisine. So I love my job. I love cooking and I love traveling. Then the question came if I would want to come to Washington and I'm happy doing that now.

And so what is a typical day like for you?

That’s the interesting thing about this job. Everything is so different. Like today I have to do shopping for the whole week because the week is crazy. It depends. Yesterday night I had a dinner. Sometimes I work on the weekend. It’s so different from each other. One week it’s not that much and then another week it’s crazy. Like hell.

What kinds of events do you cook for?

Different lunches, different dinners. Ministers who are coming over. At the residence we have some guestrooms for Belgian officials who have to be here for their job, like ministers or high-level positions.

How do you plan menus for these events?

Of course, I check the season first, that’s normal. And then the availability. I don’t like to shop in a warehouse. I have a supplier for my vegetables on an Amish farm. She sends me every three days a list of what’s available. So I kind of make my menu first by checking the list and seeing what’s there. My fish supplier, I call him every week to ask what is there and what is really fresh.

What are some of your favorite Belgian specialties to make or to eat?

Beer. I love to cook with beer because there's so much based in beer. Like French cooking with wine, we are cooking with beer in Belgium. As well as what I love in my country, we work with very local ingredients and produce. Before we went to work we picked up the eggs from the farmer. And then we have a lot of ingredients that came from the early markets in Paris. Fish and meat, the foie gras, some cheeses for the cheese trolley. Very traditional.

And where are you most likely to go out to eat in DC when you want that taste of home? Or out to drink, too?

I go to the two Belgian restaurants because there are some restaurants here with Belgian cuisine. My favorite is Belga Café. Belga Café is on 8th Street Southeast. And I go a lot to Et Voila as well, and that’s in the Palisades on MacArthur Boulevard. I’ve been in Brasserie Beck as well, it’s a Belgian restaurant. I like a couple of Belgian restaurants. I like to go out to Marvin’s as well because it’s very Belgian-style. You know Marvin? They have pictures hanging from my country, so it’s always nice in a Belgian bar. I find beers like Bavik that you can’t find that often in DC.

Which one of those do you think has the best selection of Belgian beers or is there another place?

The ones that I’ve been? Because in Belgium beers have to be drunk from the right glass. I’ve been to so many bars where they put a Belgian beer in a regular glass and for me that’s not done. It doesn’t even taste the same. It’s strange, but it is like that. And I think Belga Café is doing a really good job with that. They always serve the right beer. If they don’t have the glass, they don’t serve the beer. That’s what we do at the embassy as well. The ambassador and me are very cultural in that. If you cannot serve a beer in the right glass, we don’t serve that beer then.

Where do you buy beer?

I’m in contact with beer suppliers and they have all their representatives here in the US. I go through them mostly and sometimes the owners in Belgium as well. Normally there’s an order coming in — actually tomorrow, from Belgium.

And which beers do you bring in?

We try to offer a nice variety of Belgian beers like Gouden Carolus, Duvel, Stella, Hoegaarden, Leffe, Palm and the pink elephant, Delirium Tremens. And we have cherry beer as well for the ladies. We have Chimay Bleue. It depends. Sometimes I order like a new beer from Belgium that we didn’t have before. We try to get like a nice variety, a lot of different beers.

Do you often get together with the other Belgian chefs in the DC area?

Yeah yeah, we’re all good friends. It’s like a big scene. Sometimes around the national day we do a lot of stuff with the restaurants as well. Brasserie Beck, Et Voila and Belga Café and the residence like to throw a beer dinner for 120 people and each chef has his own course and the beer that goes along with it. It’s nice to speak your own language sometimes.

I bet. And apart from Belgian food, where do you like to go out to eat or grab a drink here?

For the times that I go out, of course I go to Belga Café a lot and Et Voila. BlackSalt is one of my other favorites on MacArthur Boulevard. And I’ve been to some nice restaurants. My birthday was two weeks ago and my parents arranged with my friend here to pick up a gift card from minibar so I can go there. It’s one of the places I want to go. Adour as well and then the Inn at Little Washington are places I want to go. Other places like Bourbon, it’s like very local and a very regular place, but it’s nice to have a nice American hamburger there. And the Blue Duck Tavern. I like that one, too. Also, I try to go at least once a month to New York and I do restaurants there, too. And I’ve been several times to Chicago to have good food there.

Do you have any favorites in those cities?

I have actually in New York, it’s very strange, I’ve eaten in a lot of restaurants there, but I love to go to a dessert bar. The name is ChikaLicious. Chika is the name of the lady. And her husband is serving. I can only sit there with, I think, like 15 people. But they make desserts in front of you that they should serve in like a one- or two-star Michelin restaurant. They work with extremely nice ingredients as well. I love to go there. They know me already there. I go to Eataly. I love all the Italian stuff, so I like to go there as well. And I like to go into Chinatown and have some nice dumplings. I’ve been in the Charlie Palmer restaurant, Aureole.

What do you think of the food scene here in DC?

I think it’s really going well. All the time I hear about new restaurants coming. I’ve been actually in Central as well, and I really liked it, too. It’s very strange, I don’t take enough time to find out all of them, you know? I’ve eaten at some restaurants as well, but I expected more of course. And that sometimes prevents me from trying another one. They’re very expensive for what you get. But I’m European, so some levels are different here than in Europe. If a restaurant is very highly rated then sometimes I’m a little bit confused.

But I love to go here. And I try to go out at least on Sunday nights, it’s my free night. I try to go every week. I try to go as much as possible to new places, too. My favorite place outside of DC is by the Bay Bridge. I like to go to the Fisherman’s Crab Deck. It’s a restaurant on top of the water with the best crabs ever. It’s just over the Bay Bridge. I think a small hour from DC, driving in the direction of Annapolis. When I have my family over — they come at least once a year — we always go there to eat crabs. I think that’s the best place that you get crabs.

How long have you been in DC now?

Do you think that you’ll stay or are you planning to go back?

I’m definitely going back, but if that’s in 20 years I don’t care. I plan to stay a little bit longer than my ambassador stays.

How does that work?

We still have to find out. I don’t know. I hope to open a business in the future as well.

I think in America, yeah. I just don’t know if it’s going to be in DC or another place. DC’s become crowded with Belgian restaurants. But yeah, we will see. I definitely look forward to the moment that I open my own.