It's no secret that the President and First Lady are big burger eaters, having made highly publicized pit stops at Five Guys, Ray's Hell Burger and Good Stuff Eatery. So we could hardly let Eater's first-ever Burger Week go by without a nod to the presidential palate. But while the Obamas seem to like their burgers fast food-style, they've also proven their refined tastes with visits to local fine dining restaurants like Equinox, Blue Duck Tavern, BLT Steak.

So last night Eater DC gathered the chefs from these three top kitchens and assigned them a task: Create a burger that would make the presidential mouth water. And in a crowded kitchen at Watershed, Todd Gray, Brian McBride and Victor Albisu did just that — with the president's go-to burger guy Spike Mendelsohn and Capital Spice blogger Mike Bober serving as judges.

The atmosphere at the newly opened Watershed was low-key as all the chefs arrived carrying their bags of ingredients to prepare in Todd Gray's kitchen. Judges Spike Mendelsohn and Mike Bober sat down in the lounge to hang out and nosh on appetizers from oysters to hush puppies as they waited on the Obama-inspired burgers. 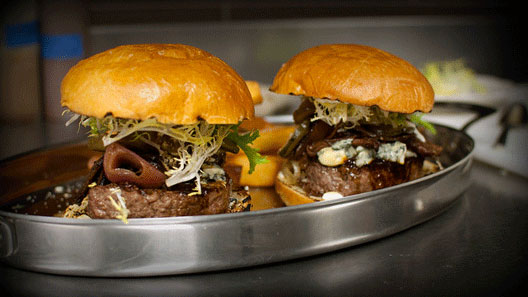 The Obama Connection: The President and First Lady celebrated their 17th anniversary at the Blue Duck Tavern back in 2009.

The Story: McBride said he believed the Blue Duck Bar Burger would appeal to the Obamas because it is made entirely from local ingredients.

The Verdict: Mendelsohn and Bober agreed that the Blue Duck Tavern fries were "as good as it gets," but unfortunately side items weren't included in their judging criteria. And while Mendelsohn declared that the jelly roll was "kind of a genius way to do a burger," the judges had problems with the jelly rolls falling out of the burger. It was most certainly not a date burger, Bober remarked. The burger's flavors were strong—maybe a little too strong for these judges. Still, Mendelsohn concluded that he'd be happy eating that burger at a bar. 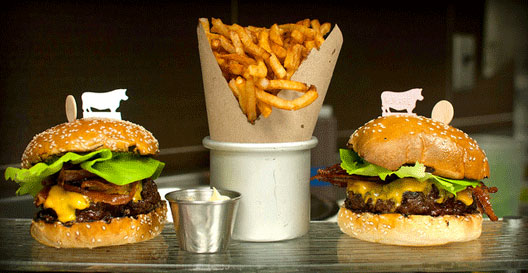 The Obama Connection: Michelle Obama has been known to drop into BLT Steak from time to time. She was most recently spotted there thanks to a picture hockey star Alexander Ovechkin tweeted.

The Burger: Chef Victor Albisu hand-chopped some Kobe beef skirt steak into patties which he then grilled and topped with Wisconsin cheddar, burnt tomato ketchup, bacon and fresh ramp mustard. He brushed the sesame buns with fresh-cured whipped lardo and served a side of fries with aioli.

The Story: Albisu explained that Michelle Obama loves her Kobe beef, so that was a no-brainer. The Wisconsin cheddar was a nod to Wisconsin Democrats, he said. And the wild ramp dijon mustard? The president is known for liking both spicy greens and spicy mustard, so Albisu decided to combine the two.

The Verdict: Mendelsohn was immediately impressed by Albisu's presentation, suspiciously asking the BLT Steak chef if he was going to be opening a burger joint. "You'd better hope not," Albisu joked. Once the chef left the table, the judges dug into the burgers and couldn't stop talking about the ramp mustard— with Mendelsohn even threatening to steal the idea and name his new Good Stuff Eatery burger El Victor in the chef's honor. Bober liked Albisu's narrative, but neither chef was crazy about the sesame seed bun. 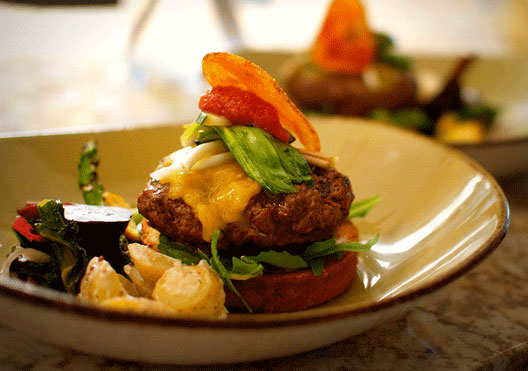 The Obama Connection: Located essentially across the street from the White House, Equinox has been an Obama favorite ever since inauguration. It was the site of an Obama date night in 2009, and Michelle Obama brought her counterpart from Mexico here for lunch just last month.

The Burger: Chef Todd Gray's burger was made with local Pride of the Plains 28-day dry-aged beef on an open-faced brioche bun. He topped it with pickled ramps, cheese, Swiss chard, red onion marmalade and a crispy house-made potato chip, along with a slew of early spring vegetables like courgettes, leeks, fingerling potatoes and heirlooms.

The Story: The Garden Burger was an homage to the First Lady's White House Kitchen Garden, Gray explained to the judges. The burger and the potato chip topping were for the President, he said, while the garden aspect was meant to appeal to the First Lady's palate.

The Verdict: Bober immediately declared Gray's Garden Burger "a knife-and-fork" burger, which seemed to be a mark against it as Mendelsohn noted that his own idea of a burger is one you pick up with your hands as the juice runs down your face. Still, both judges loved the story and appreciated the garden aspect — this could be called the Let's Move Burger, Mendelsohn said. The beef had the best backyard burger flavor, according to Bober, and the judges agreed that Gray took the biggest risk of all the competitors.

Mendelsohn and Bober judged the three burgers based on creativity, adherence to the theme and flavors. Accompanying fries were discounted and so were Gray's vegetables.

And The Winner Is...

The judges diplomatically decided that their ultimate Obama Burger would be a mash-up of all three competitors: Brian McBride's brioche bun, Victor Albisu's flavors and Todd Gray's beef patty.

But we're not practicing diplomacy here. We wanted a winner and we got one—unanimously selected, too. And so, without further ado: The winner of the 2011 Obama Burger Challenge was BLT Steak's Victor Albisu, creator of a killer spicy wild ramp mustard that wowed the judges (and the peanut gallery). And, naturally, former Top Chef contestant Mendelsohn couldn't resist telling Albisu to pack his knives and go.

Many thanks go out to all the participating chefs, judges and most especially to Todd and Ellen Gray for generously offering the use of Watershed's kitchen for the challenge.