Welcome to Eater's latest feature, Shit People Steal, in which we ask restaurateurs what items in their restaurant have been (or are frequently) stolen. 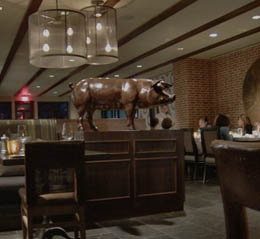 This time on Shit People Steal: two counts of pig theft. No, not actual pigs. It's Jackson 20's pig-themed decor that seems to be too good for thieves to pass up. The Alexandria restaurant has had not one but two piggy statues stolen away over the years. (And goes to great lengths now to protect their replacements from the same fate.) General manager Reagan Corbett recounts the saga of the missing pigs, plus a few other choice items like a sentimental set of antlers:

Jackson 20 has had a number of items stolen from the restaurant — from the pig napkin rings to the bronze statue of Bessie the pig, which sits at the entrance of our restaurant. We had a search and rescue out for Bessie and she was returned 24 hours later. Turns out she was kidnapped by a guest in the middle of the night. It happened during the middle of closing so we had less staff around who were busy shutting down for the night. He stealthily snuck out the front door with her and jumped into a cab that his friends were waiting in. I guess he felt guilty as he brought her back the next day.

Recently, we had a small bust of Andrew Jackson and a set of antlers with funny stories from the opening of our restaurant stolen from the restaurant — they were in the window sill at the back of the dining room. Basically, everything that we use for event table décor has been taken, including Hamlet #1, our mini bronze pig who was stolen from the dining room. Now, Hamlet #2 goes to the office every night at about 10 p.m. — we keep him in the safe so no one takes him, too.