Share All sharing options for: Another New Cupcake Contender 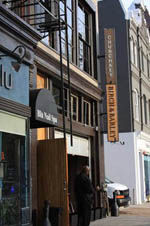 Pies tried their very best, but will the doughnut be the confection to finally unseat the cupcake in DC? The City Paper takes a look at the treats all over town, including the popular off-menu "Luther," available Sunday nights at ChurchKey — fried chicken and bacon sandwiched by a brioche doughnut glazed in maple-chicken jus. The restaurant's pastry chef Tiffany MacIsaac says she's been asking owner Michael Babin to give her a boutique doughnut shop, telling him that "Donuts could be the next cupcake." [WCP]