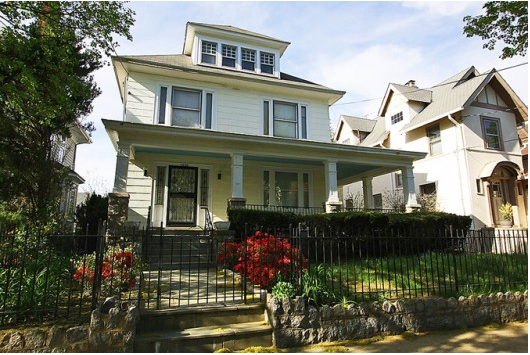 16TH STREET HEIGHTS—Michelle Rhee's house entered the market this spring at $875,000 which is $20K more than she paid for it in 2007 (pictured above). Click over for interior shots, including a wood floor that has been 'ebonized'.

SCOTTSDALE, AZ—Sarah Palin and fam have bought a house in Arizona so they can 'thaw out', she says. It was originally on the market as an unfinished foreclosure and someone took a video tour of the 7,000 square-foot place long before the Palins became part of the picture. Click over to see what a master bedroom that takes up an entire level actually looks like.

SURRY, VA—We recently mentioned that Michael Vick's former house has been bought by the animal rights group Dogs Deserve Better. They plan to turn it into an animal sanctuary and we have some early renderings that give an idea of what it will look like. They are close to achieving their financial goal, but still need people to donate to the cause so they can put in all the bells and whistles they want—including an indoor walking track for bad weather days.

APPOMATTOX, VA—The most expensive house on the market in Virginia is an $18M house built in 1835. The amenities are more this century, though, since we don't think a 6,000 bottle wine cellar would have done much good in the 1800s. Curbed has the photos.