The Cooking Channel's film crews have been at Oyamel today taping for the fourth season of Unique Eats, a show that claims to be "the first look and the last word in everything extreme in food today." A tipster sends in a photos of the crew roving the José Andrés Mexican restaurant, plus a shot of the crowd notice release warning people that they may be photographed or recorded should they choose to enter the restaurant. A rep for Oyamel says the crews have already interviewed chef Joe Raffa and have been shooting in the front of the house as well as the kitchen.

And the crew is sticking around DC for the weekend, it appears, with another taping planned for Toki Underground on Sunday between 5 and 8 p.m. The H Street ramen joint is offering a 10-percent discount to everyone all night Sunday to compensate for forcing your 15 minutes of fame upon you. You have been warned. 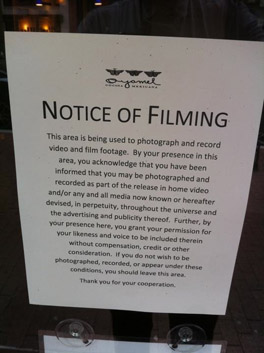 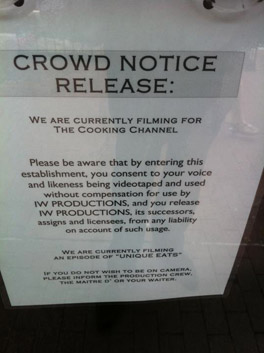