Graffiato's James Horn On VIPs And Bribes He Might Accept

Welcome to The Gatekeepers, Eater's latest feature in which we roam the city meeting the fine ladies and gentlemen that stand between you and some of your favorite impossible-to-get tables. 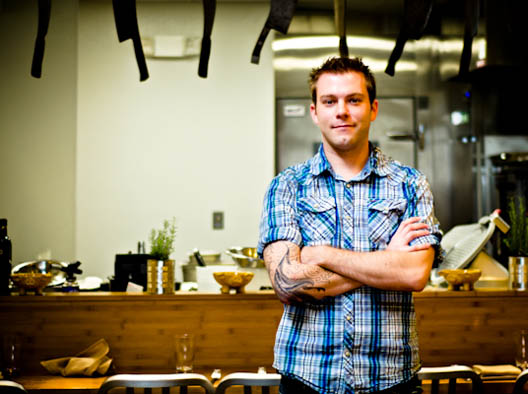 Graffiato opened just last month and has been slammed with reservations ever since — thanks in large part to chef Mike Isabella's run on Top Chef, early critical acclaim and the restaurant's relationship with the rest of the industry. General manager James Horn is the man to know if you're trying to elbow past Eric Ripert to a table. We recently sat down with him to chat about what qualifies as VIP at Graffiato and what gifts you can slip him for a four-top. (Hint: That part-time job at the Apple store will come in handy.)

Say it's 8 p.m. on a Saturday night. What's the wait for a table?
A table upstairs, you're going to have a hard time getting a table throughout the night. We book almost the entire second floor for reservations. We leave a few slots open for investors and people like that. However, downstairs both bars are first-come first-served, so you see someone on their check, you plant behind them and sneak in when they're done. And we have six booths that are in the back of the dining room that are available on a waitlist basis. So you can get a table. It's probably anywhere between 30 minutes and an hour and a half.

How about gifts or money?
Not really. We're not that type of restaurant. Gifts would be fine. I got my iPad stolen during the buildout so I'll trade a table upstairs for an iPad any day. But other than that, trust me, if we had a place to put our customers, we'd put them there. A handshake really doesn't do any help, but we appreciate the offer.

So tell me about your favorite customers. Do you have any regulars already?
Definitely. We've only been open for a little bit more than a month and have very strong regulars who have been in six, seven or eight times. Some of them are our investors or our friends while others are neighborhood people. We pride ourselves on being a very neighborhood-centric restaurant. My favorite people are the ones that come in with different experiences each time. They come in for just a pizza and a beer and sit at the bar or they make a reservation on a Thursday and come in for a chef's tasting menu and spend $300 for four people. That's what the whole concept is about, something for everyone.

How about VIPs?
We have a different definition of VIPs than what most people would consider VIP. Our VIPs are people that are industry. We know how hard they work and they know how hard we work. The outside world doesn't really see what goes on in restaurants. Our VIPs are people like Scott Drewno and Haidar [Karoum] and Derek Brown and people that work their asses off just the same as we do. I tell you, if Scott and Brad Pitt walked in at the same time for a table of four, Scott would be seated in a much more timely manner than Brad Pitt. I welcome Brad Pitt, but those are our VIPs, those are our celebrities. People that inspire us.

Are there a lot coming in?
A lot. We've had anyone from Eric Ripert and Marc Vetri was in the other day. And all local chefs. Haidar from Proof, all the guys from Estadio, Scott from The Source, all the Think Food people. We're a late-night restaurant and we do that on purpose to provide everyone a place to go after work to have pizza and drinks.

So how do you deal with your VIPs when there aren't any tables left?
Well, we try to get them in as early as possible, we seat them downstairs in one of the booths that is on the wait-list, maybe make some room at the pizza bar or the bar. People that are our VIPs are easily accommodated. They're not going to demand the best table upstairs on a Saturday night. They just want to sit and eat and enjoy the company and food. So we're pretty good about accommodating. We have a lot of turnover. It's never any problem. If I don't have anything, I just don't have anything. But, then again, if Daniel Boulud walks in, I'm not going to send him back to New York saying, "Sorry chef, I don't have a table for you."

How long does it take for a table to turn?
Usually a table of two on a weekend or a weekday night is about an hour, depending on the route they go. If they decide to do the chef tasting then they can have the table for a little bit longer because they might need a little more time and effort. But the average person will go two courses and dessert with pizza and some drinks. In and out.

Do you try to get them out a little faster?
We don't encourage them to camp out, necessarily. They're welcome to sit at the table as long as they'd like as long as they're enjoying themselves and ordering and drinking. But at the end of the day it's business. If you're in a movie theater and the movie's over, you go home. If you're in a restaurant and your dinner is over, you go home. We're not pushing, but we hope everyone understands that's the way we have to do it.

What's the most outrageous request you have been able to accommodate so far?
We're still young so we haven't gotten some of the classics. The weirdest one would be one of our investors asked me personally, "I need to bring home two or three of your dishes pureed. Can you put a pizza in a blender and then maybe meatballs and polenta and then spaghetti and meatballs pureed up?" And I started laughing and I'm like, "Yeah, very funny, Bob." And he's like, "No, seriously. I have a friend who had his jaw wired shut and he wants to eat your food." And I went downstairs and I told Mike and he didn't believe it either. I was like, literally, I need to borrow the Vita-Prep. And I pureed it up with some olive oil and had three to-go containers of this weirdly colored puree. I heard he liked it.

Is there anything you haven't been able to accommodate?
I would say if we have it in the restaurant, we're able to do it. We're extremely accommodating to requests. Mike has been adamant about it his whole career and we share the same mindset about the customer is always right. You can do whatever you want. You can get a pizza with anything on it. A duck egg and calamari and French fries, or whatever. If we have it, we'll give it to you. If you're going to pay for it, we'll charge you for it, but it's not up to us to dictate what you like. So if you want something and we can provide it for you then we'll provide it no matter what. So if you want a towel stuffed into a calzone, OK, we'll charge you $3.

You charge extra for the towel?
Yeah. It's not included for the price of the calzone.

So where are you eating when you're not here?
Nowhere because I'm always here. But I love Proof. Burgers at Palena. I'm always hanging out at Zaytinya, been going there for years. Estadio, ChurchKey and Birch & Barley are my favorites. Anything on 14th Street. That whole strip is sort of my old stomping ground. I like Policy a lot, too. It's kind of underrated, down at the end of 14th Street.

And what's the one gatekeeper tool that you need the most for your job?
I think mine is that I enjoy confrontation in a positive way. If I hear someone is upset, I love going to them and making their night better, solving their problem. If I hear someone is happy, I like to go up to them as well and be like, "I'm so glad you enjoyed yourself. Is there anything else I can do for you better next time? If not, we'd love to welcome you back." So any chance I get to solve a problem or make something better. Confrontation. It doesn't sound very good, but break it down, it's good.