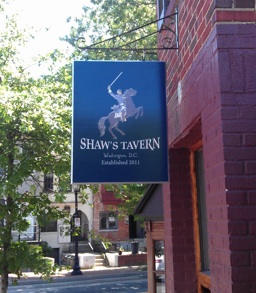 CLARENDON—A hold-up with the liquor license means that the new Clarendon Cava location won't open today as planned, says owner Ted Xenohristos. But the good news is that the space is all completed and, once that liquor license comes through, they'll be ready to open. [POST-PLYWOOD]

SHAW—Shaw's Tavern has also been held up thanks to a delayed delivery of their hardwood floors. The estimated June 1 opening has been pushed back until sometime after those floors arrive this week. But they did get a pretty new sign, as seen to the right. [PLYWOOD]

LEDROIT PARK—Prince of Petworth sees a coming soon sign for a new Potbelly on Georgia Avenue near Howard University. [PLYWOOD]

ALEXANDRIA—ARLnow reports that a new restaurant named Melody Tavern is headed to the Potomac Yard in the old McGinty's Pub space. The tavern, which will host live music and a jazz brunch, is expected to open sometime in September or October. [PRE-PLYWOOD]

TENLEYTOWN—PoP has it that the old Simply Ayzen in Tenleytown has reopened under a new name: Chanya Thai Restaurant and Sushi Bar. [POST-PLYWOOD]