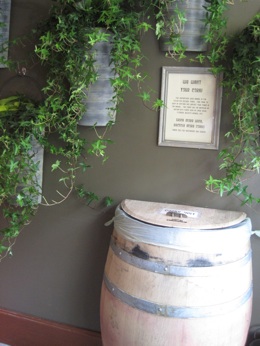 This time on Shit People Steal, Firefly's assistant general manager Eric Santiago has a strange encounter with a thief who either really hates the environment, plans to cheat ineffectively in baseball or has a low-budget DIY project in mind:

On a quiet Saturday afternoon three people (two women and one man) came in to the bar for drinks. After about an hour and a half, they settled their check and left, or so I thought. I saw them outside the restaurant huddled up in conversation that seemed to be pretty serious. I went to do something else, and about two minutes later I looked in the vestibule (where we have our cork collection center for recycling corks) and saw one of the women with a plastic grocery bag. She was frantically scooping handfuls of corks into the bag and as soon as she saw me look at her she scurried out of the restaurant. It was bizarre to say the least!

Want to submit your theft stories? Send to dc@eater.com.