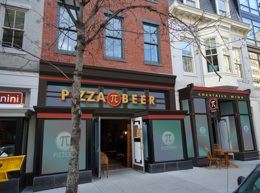 1) Penn Quarter: Wagamama has finally updated its signage to read that it plans to open in "early 2012," according to a Facebook group called Bring Wagamama To DC! [PLYWOOD]

2) Penn Quarter: The Washington Business Journal says that the District of Pi Pizzeria is finally going to open in September, about a year after the St. Louis-based restaurant announced it was coming to DC. And the restaurant has indeed been on a hiring spree. If you can't wait a month, the pizzeria's food truck has been out on the road for months now. [PLYWOOD]

3) Columbia Heights: New Columbia Heights spots signage in the DCUSA food court complex for Panera Bread, which is scheduled to open up next to Panda Express in October. [PLYWOOD]

4) Petworth: Prince of Petworth reports that there is now a building permit up at Billy Simpson's, a new project from the guys behind Marvin and other local watering holes. They've also apparently applied for a liquor license. [PLYWOOD]