On Monday, Eater revealed a controversial two-page dining contract for the recently opened Rogue 24. And now that contract has been revised. Eater sat down with chef/owner RJ Cooper, who unveiled his restaurant's new "guest questionnaire" that officially replaces the contentious “reservation agreement” and excises some of the more divisive policies and language — in particular, he got rid of the 100 percent charge for cancellations made after 3 p.m. on the day of or for those showing up more than 30 minutes late. He also explained his motivations and intentions for the original agreement.

Restaurants ask in advance about dietary restrictions; they ask in advance for a credit card; they have cancellation policies. Taken as a whole though, this contract goes beyond that.
[Reservationist] Bonji [Beard] fields 100 phone calls a day and makes 70-80 reservations. If she were to take 15 minutes per phone call, she’d be here all night. Instead, we’ve drawn up an email agreement that goes to the guests, which includes all their needs, so we don’t need to do it over the phone. It’s not about being superficial; it’s about getting the desired information to make your experience seamless and better than expected. On 52 covers, we do 1,200 plates a night, so we need to prepare. We had a gentleman in on Saturday who couldn’t eat chicken, almonds, spinach, arugula and blue cheese. Are we going to say no to him? No, that would be arrogant. But since we had the reservation agreement in hand, we could write him a menu.

Why no phones or photos?
It’s really about being polite to your fellow guests and your dining companions. If everyone brings out their phones, it detracts from the experience. We’re not telling you not to Tweet; we have areas to do that. You can do it in the salon or the bathroom. We just don’t want cell phones in the dining room.

If someone does take out their cell phone or starts taking pictures during dinner, what’s the staff’s reaction going to be?
The staff’s so focused that they’re probably going to miss it. We’re trying to create an experience that you won’t find anywhere else, so we want diners to concentrate on the beauty of the meal. Also, we’re going to start offering pictures on our website, so people can download photos of our dishes.

You wouldn’t ask a guest to leave if you saw them taking a picture?
No, because it’s not about being a cop or a Nazi.

You’re attached to your phone; you Tweet; you’re on Facebook. In dining culture today, people like to document their meals in a variety of media. Do you think it’s unfair to ask guests to not do that at your restaurant when it’s so prevalent at other restaurants?
Let’s say you’re out on a date, but you sit there Tweeting. What are you doing to your companion? You’re alienating them. You’re in an environment that’s trying to create an ambience that you can’t get anywhere else. If you go to the theater, they ask you to not use flash photography, because it distracts. It’s the same thing here. We’re in the middle of the dining room, so the flashing distracts us as well. We’re just trying to make sure that we’re doing the best possible job we can for each guest. On Saturday we had 14 different dietary restrictions and it takes a tremendous amount of focus to put out our kind of cuisine for 24 courses with that many variations.

Why the stringent cancellation policy?
It’s not set in stone. Do we abide by it? No. The policy gives us a chance to fill the table and it gives the diner a reason to call and cancel. Have we charged anybody? No, because that’s not what it’s about. It’s about making sure we are able to fill the seats of our revenue base. This also guarantees diners a seat. We’re sold out tonight and we’re sold out all week.

Have you had cancellations?
Absolutely. We had a cancellation today; the woman’s sick. What are we going to do? Charge her? No, she’s sick.

What’s the new policy?
It’s basically, "Please call and cancel." We’re not here to win it all. All we’re saying is, "We’re a 52-seat restaurant. If 10 people no-show, that’s one fifth of our revenue gone." All we want is the opportunity to fill the table.

I get the sense that you had no idea this contract would be a point of controversy.
No, I didn’t. But it’s not any different than going to Minibar or Alinea. The difference is that Alinea has six reservationists that can handle that; we have one. Minibar has six seats; we have 52. Komi has a no camera and phone policy in their restaurant. What’s the difference? Is it going to make experience better to have a phone? If it does, please tell me, because I hate my phone. I'd rather not have to deal with the 500 emails and 60 voice messages I get every day. I’d rather just sit and really enjoy the experience of a place like this. Are we doing this out of arrogance? No. Are we doing it out of being hyped? No. We’re doing it to make sure you as a diner have a valued experience. 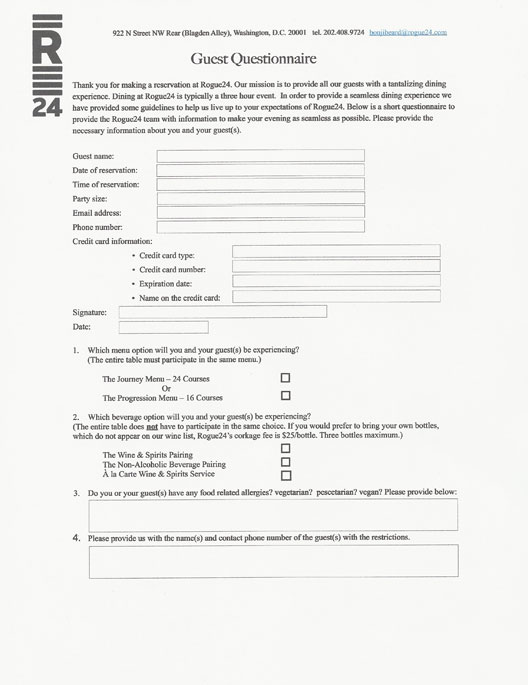 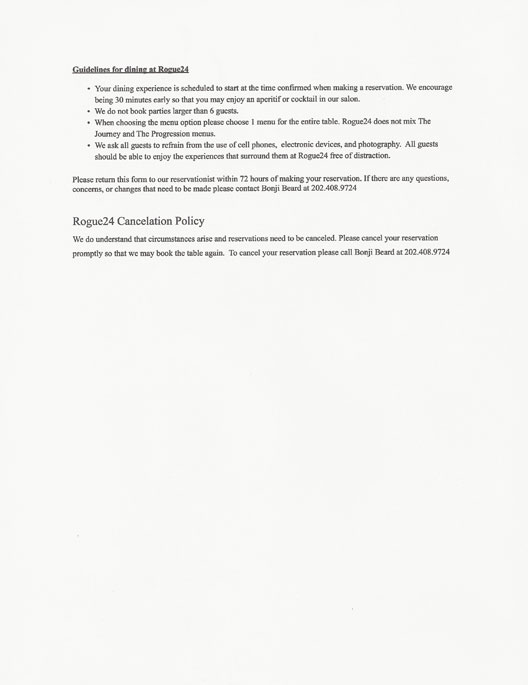