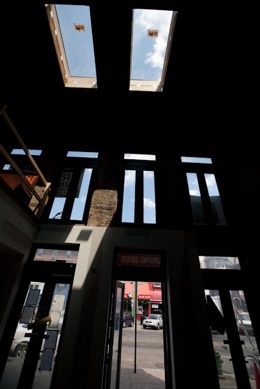 1) Penn Quarter: Elisir's Facebook page has a video depicting the ongoing construction at the forthcoming tasting restaurant from Enzo Fargione, formerly of Teatro Goldoni. They also have menu covers all picked out. [PLYWOOD]

2) Adams Morgan: To your right is a recent photo from inside the new Adams Morgan Mellow Mushroom location. It has skylights. [PLYWOOD]

3) Adams Morgan: Tom Sietsema reports that Adams Morgan is getting a new Moroccan restaurant named Marrakech Lounge, not to be confused with Dupont Circle's Marrakesh Palace. The new restaurant, scheduled to open September 1, will serve traditional Moroccan dishes, but the new chef tells Sietsema that they're also going for a "French-Mediterranean flair." Inspection are still pending. [PLYWOOD]

4) Adams Morgan: Prince of Petworth runs into Mintwood chef Cedric Maupillier and gets a sneak peak inside the restaurant. There's a lot reclaimed wood (from an Amish barn no less), and the kitchen is going to feature a wood-burning grill. [PLYWOOD]

5) Farragut Square: The stretch of Pennsylvania Avenue near Lafayette Park is getting a Jimmy John's sandwich shop sometime in late August or early September, according to PoP. This is in addition to the one bound for McPherson Square in October. [PLYWOOD]

6) K Street: Thrillist takes a look inside the Opera Ultra Lounge, dubbing it "a subterranean, Blade-bloodbath-worthy oontz-room." There will be a grand opening on September 8. [POST-PLYWOOD]