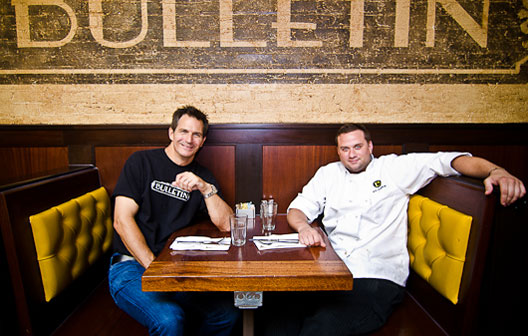 Last summer, the Matchbox restaurant group opened up their second concept, the home-style diner Ted's Bulletin on Capitol Hill. The restaurant, which quickly became known for its homemade Pop Tarts and alcoholic milkshakes, seems to have won the hearts of its local community with a Rammy win for best neighborhood gathering place. It even attracted attention from the White House — President Obama stopped by earlier this month for a cheeseburger. Eater sat down with owner Perry Smith and chef Eric Brannon to talk about the first year of Ted's and where they're headed next.

How did the concept come about?
Perry Smith, owner: We had opened up Matchbox on Capitol Hill and we also knew that after we got settled here — this was back in 2008, 2009 — that there was also room for another family-style restaurant, more of a diner. Whenever we develop a concept, we always talk about, well, it's not just going to be a diner. It's going to be something a little bit more upscale than that yet at the same time accessible. But a lot of it has to do with the community because people said, "We need a place to eat breakfast here on Capitol Hill." The history of breakfast in Washington is that breakfast has always been relegated to hotels. So they would do conference rooms in hotels or hotel restaurants. But there weren't a whole lot of really good diners that served very good family-style meals at breakfast.

How did menu-planning go?
Eric Brannon, chef: The best part about developing the menu is these guys. They do a lot of the groundwork, but they incorporate the chef team, the management team and listen to our opinions. Another large aspect of Ted's Bulletin and what it is was it's dedicated to the owner's dad, Ted Neal. This was a guy that was a neighborhood guy, he loved cooking for the neighborhood, he loved this type of food. It's almost like a conceptual heart is set up. Here's what we have: A diner that's upscale, fresh, scratch diner, home-cooked meals. I have my dad's Green Goddess recipe here on the menu because that's what I grew up eating as a kid. I have my mom's meatloaf with fresh sage. So it started to steamroll and get really fun. Working within those guidelines and creating a menu where when people would eat it they jump 20, 30 years back to their home and say, "This is exactly how my grandma made spaghetti and meatballs."

So whose idea were the Pop Tarts?
PS: We always look for something different. We were talking about ideas for pastries and we said, you know, cookies and muffins, things like that. What's something that somebody's not doing? EB: The nostalgia throwbacks. We have Twinkies, we have Sno-balls. Going with the whole concept, Pop Tarts fit into it. Originally, we didn't know that was going to be such an item. The first couple of days we made 20 or 30 Pop Tarts and they were gone in 20 or 30 minutes. Now our production of Pop Tarts is thousands a week, to the point of people buying by the dozen, wholesale, a hundred for a party. On any given Sunday we sell about 500. I don't know if we ever thought that would go in the direction it did, but it's turned into a signature item. PS: For us everything kind of ties together. You have the whole front of the house space where you walk in and it's very welcoming, you can grab a seat at the counter. And then the whole pastry section was really, obviously for the smells, the flavors, the textures, the visual. It was about being able to connect that to the customers walking by on the sidewalk. So there's a window. You can open the window and talk to the pastry chef.

How did the buildout go?
EB: This was a really longstanding hardware store. I've met people walking down the street saying, "My uncle used to work there," or "I used to go there as a kid." So it kind of fit already, being such a neighborhood staple old building. PS: People still come in and ask if they can get keys cut here. We talked about that at one point very briefly if we should put in a key-cutting station. But as far as the buildout went, we basically did what we normally do for a space. We completely gutted the interior and started over. I think from the original space the only thing that was left over would be the skylight. Everything else was pretty much gutted from the front to the back. It followed the same kind of timeline that it always does, which is that you do six months of prep and demolition and then you do about six months of buildout and then you open.

And then how was the opening?
EB: Well, if you've never opened a restaurant before, it's a blast, first and foremost. There will never be a group of higher energy people in your life. It's electric. The room is electric, the guests are electric. For the most part, everyone is understanding that you're working out your first day kinks. But the lessons learned.... One on the kind of comical side, we really wanted to do these butter containers. They're classic, really cool. I think on the first day we broke about 300 of 'em and realized we're a volume restaurant. We had a couple mock shifts and staggered people in, got positive feedback from other chefs and restaurateurs and general public as well let in. And then when opening went down, it was a madhouse, but it was controlled insanity. I think we hit full stride within a couple weeks and worked out all the major bugs right off the bat. PS: When you open up an entirely new concept, no matter what, you can have certain systems in place but you're really starting from scratch. So it was very humbling. Some things we've changed and some things we kept. EB: Some things we made better. The original ideas that we took even further like the Pop Tarts. That's really working, let's play with this. Let's have six or seven rotating flavors, seasonal. Let's make special boxes and special logo bags for them.

What are some of the other things that you changed throughout the year?
EB: Our original menu was a little too extensive. Within these walls we squeeze actually a lot of seats. They're comfortable seats, but as far as the sheer storage and production and execution, the menu was too big. We had way too many a la carte stuff going on. And we also realized to do what we want to do — be such a scratch, fresh place — minimalism helps ensure that. Two weeks in, we took a look at the menu and got out the marker and just, "OK, this has been the biggest seller. Let's lose this, let's lose this." And it just made it work. Most things are pretty minimal. A lot of steps of service. You don't come in here with the Ruth's Chris steps of service, but you don't come in with the Denny's steps of service. So what are we? What are we defining? So you just tweak as you go.

How was the response from the neighborhood?
PS: One of the things that we found is that clearly we had set a standard at Matchbox. So we had to react a little bit more quickly after we opened up Ted's because the expectation was already there, in a good sort of way. We did have a couple of friends and family openings, but you know how it is today. We either could have had people check their cell phones at the door or the word's going to get out. Friends and family were Yelping. They were posting pictures as they were eating on initial entrees they were testing out. EB: I've had more people in this restaurant photographing their food than I've ever seen in my life.

What was it like to win the Rammy for best neighborhood gathering place?
PS: That kicked it into overdrive, didn't it? It was a validation of what these guys were doing. It's about the neighborhood and it's about what these guys were doing. EB: We worked really hard. The coolest part was when the guests would come in and say, "I've heard you're nominated for a Rammy, we told all our friends to vote." We didn't have to work very hard to publicize it or push it. People were already on our side. Being the neighborhood gathering spot is exactly what fits for us. It's exactly what we want to get. Immediately after, it was a great tool for marketing. It brought that many more new faces in here to give us a try.

So what was that like to have President Obama dining here?
PS: When he was there it was incredibly exciting. Talk about the power of social media, probably at least an hour before word was getting out that there was Secret Service around and crowds were gathering. He's got the X-factor. He walked in and shook everybody's hand and strode over to the group that he was hosting and got going on his agenda quickly. He had already checked the menu out and he ordered his cheeseburger medium with fries and a side salad. We had Pop Tarts on the table. He commented on them and said, "Wow, these look pretty awesome," but he didn't eat one of those. People come in and they want to know where he was. The banquette has now been made the Obama Bench.

And what does it mean on your one-year anniversary to get a visit like that?
PS: It's amazing. For all the issues that are going on in the country, t's very humbling that the president would actually show up. This is a DC community, but we were talking about it and we said if he's out campaigning or doing presidential business, what small business owner wouldn't remember that forever? That the president showed up to their business? That really was what it was about.

Is there any update on the second Ted's Bulletin you're trying to put on 14th Street?
PS: No specific update. We're trying to finalize some details of the lease. Nothing has been signed. We're talking and trying to move in that direction. But as of now nothing is in stone. We still love the space, we love the building there. It's more just kind of haggling out the final details, but we're still in progress to make it happen. I'm very excited about it, too.
· All Previous Ted's Bulletin Coverage [-EDC-]
· Previous Editions of One Year In [-EDC-]