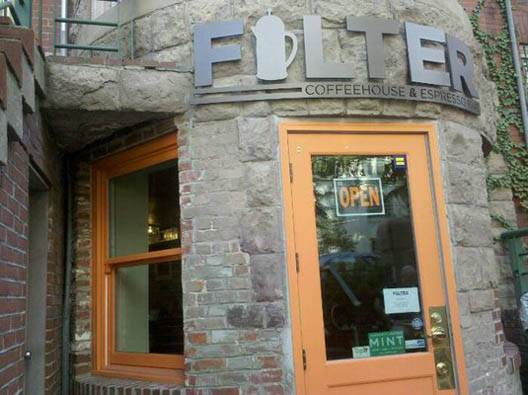 1) Foggy Bottom: Prince of Petworth gets confirmation that Filter Coffeehouse is opening up a second location in Foggy Bottom after "a significant buildout." Unfortunately, they don't share where the coffeehouse is actually going to be located other than around 19th and I streets, but it will take about four to six months. [PRE-PLYWOOD]

2) Judiciary Square: The 42 spots a sign announcing the impending arrival of a fast-food trio in Judiciary Square. These include a Baja Fresh Express, Uno Express and Canyons Burger Company. [PLYWOOD]

3) Columbia Heights: PoP checks in on the diner intended for 11th Street from the people behind Tryst and Open City. It turns out they've gotten their liquor license and are just waiting on building permits before they start construction. [PRE-PLYWOOD]

4) Capitol Hill: PoP discovers that the space at the corner of Potomac and Pennsylvania avenues, near the Potomac Avenue Metro stop, has been leased to a gelato shop. No further details, but yay gelato. [PRE-PLYWOOD]