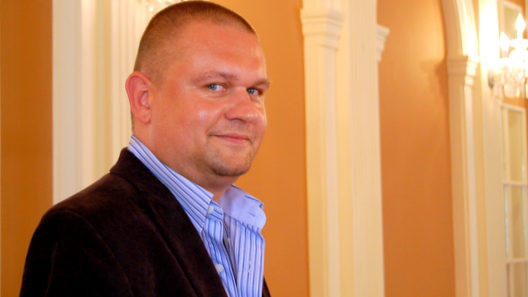 After three years, Adam Holewa is cooking into his final year as the Polish embassy's chef in Washington, DC. It has been a particularly important time, as Poland holds the title of Presidency of the Council of the European Union until the end of 2011. With Poland in the spotlight, Holewa, 40, works to showcase both Polish heritage food and its new Euro-fusion cuisine. He also tells us about what he misses from his home country and compares DC to his former embassy post city, Paris.

How did you get into cooking?
It was 7th grade in grammar school. I knew this was the direction I wanted to take. I loved being in the kitchen. It was a calling.

What was your progression to being an embassy chef?
I had training for six years in Warsaw at a culinary institute. After I went to school, I got a job with the Prime Minister's Chancellery. After, I began working for the Ministry of Foreign Affairs. And, after two years, my first posting was in the embassy in Brussels, and then I went back to Poland for four years and then my next posting was in Paris. After Paris I went back to Warsaw and now I'm here.

Where do you get your ingredients?
In the interest of time, because, as you can imagine, this is all incredibly intense, I try to go to places where I can get everything. So [I go to] either one place or two. Costco is a great place, and then anything that's around there. But I want you to know, this is specifically for time.

Do you normally cook Polish food for events here?
It all depends. When we have our EU Open House day, for example, we serve Polish food. Then I'll go to New York or have someone go for me because there are tons of Polish shops and delis because there are so many Poles and Polish Americans there.

I talk to the diplomatic protocol to set menus for our diplomatic delegations. I also talk about the menu with the Ambassador and then decide what type of cuisine it should be: "Should it be Polish cuisine? Should it be something lighter?" Right now Poland holds the Presidency of the Council for the EU, and Polish embassies just generally around the world are using food as an expression of promoting Poland. Poland cuisine has these incredibly long ancient traditions and we're very proud of that fact. It's very sophisticated, it's very European. So for the delegations that are here for the presidency, that's the type of cuisine I will prepare.

The menu depends where I am. I'll go to the store, for example, and I'll look at the products, specifically fruit and vegetables and just kind of create something. There's a very typical Polish dish, it's like a Polish gazpacho. And I'll create it with typical American produce, like a melon. It's a cold soup with cucumber, garlic [and] beets. So I'll make a fruity version with very typical American [produce]. I create like a hybrid of Polish-American.

What types of Polish food do you miss that you can't get here?
Wild game: deer, pheasant, boar, some sweet water fish. Specifically, I miss Polish mushrooms that grow wild and are very, very aromatic. And they're used in a lot of Polish dishes. And Polish blueberries: the aroma is totally different and they're more violet than blue. And they're very, very juicy.

Do you have any Polish hang outs in DC?
Not in DC. Usually world cuisines are grouped according to climate so when I search for Polish foods, I look for cuisines for a similar climate to ours. So, for example, Germany, Russia, Ukraine. When I want the comforts of home I'll make it or my wife will make it. But the Russian restaurant [Russia House] on Connecticut is a place I'll go. Our philosophy with me and my wife is that we want to experience as much of America as possible so we try not to go to the same place twice.

What do you think of the DC food scene?
To compare DC to Paris [Holewa spent a similar amount of time in Paris as an embassy chef]. Parisians, for them, there is only French food. But in DC, you can really get all sorts of cuisines and that's a major difference. You don't have to travel to China to have good, authentic, Chinese Szechuan food. You can get that right here in DC.

What's happening in the Polish food scene today?
Polish cuisine has gone through enormous revolutions, all the way back from the year 966 when Poland adopted Christianity. Over 1,000 years of history, when Poland had military victories, and also taken over, and so it's this huge sense of all of these centuries of this nation that was constantly changing and evolving. And then the war period and the Communist period kind of dampened all of that.

But after 1989 and today, Polish cuisine is undergoing yet another evolution. That's what's really exciting today in Europe is the combination of Polish cuisine with the cuisine of other European nations, for example, Spanish, Italian, or Greek. This great fusion is happening as Europe is becoming closer and more integrated. It's the influence of other nations: Poland is in the EU now, Poland is in NATO now. The borders are open. It's just kind of natural that the countries have influenced each other's cuisine.

What do you want to do in your last year working at this embassy?
In Paris, I once cooked for 1,200 people on my way out. Unfortunately we can't fit that number here, so it won't happen. I don't think of it as what I'll miss because my work is in diplomacy, and diplomacy is all about travel and new experiences and constantly looking forward. Because my last year coincides with Poland's presidency [of the EU], it's an opportunity for me to really showcase Polish food. Sometimes the older traditions of Polish food, sometimes the fusion.

Where do you want to go next?
Australia comes to mind definitely. It's far away and it's someplace that I definitely want to see.

· Previous Editions of Eater in the Embassy [-EDC-]