Welcome back to the Shutter. Know of any other restaurant that has met its demise? Let us know. 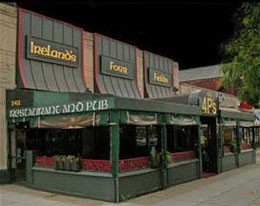 1) Cleveland Park: After 35 years in business, Ireland's Four Fields is calling it quits in Cleveland Park dues to increased costs of operating. Owner Frank Hughes tells WTOP that the bar will officially close on November 5, but still might relocate. There are also apparently rumors that this space will become another McFadden's. [WTOP]

2) Dupont Circle: A tipster informs Prince of Petworth that Jonathan's Gourmet Deli has shuttered on 19th Street. A sign on the window declares it "permanently closed" and thanks patrons for their support over the years. [PoP]

3) Columbia Heights: Prince of Petworth also hears that Tegeste has closed in Columbia Heights after not even a year in business. He snaps some photos of a for-rent sign in the window of the Ethiopian restaurant and a canceled rent check that was posted there too for good measure. [PoP]