Things Thieves Have Taken And Will Take From Graffiato

Share All sharing options for: Things Thieves Have Taken And Will Take From Graffiato 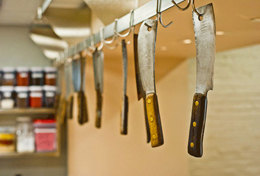 This time on Shit People Steal, a restaurant that has been open for not even three months, Graffiato. It turns out that three months is plenty of time for people to steal shit. In fact, the very first theft came during the buildout — an iPad that general manager James Horn told Eater back in July he wanted back so badly he'd trade a table for it. So what happened?

Well, as Horn explains, he was interviewing candidates at a table in front of the restaurant when a salesman from a chemical company dropped by wanting to take a look at Graffiato's dish room. Without thinking about it, Horn left his iPad sitting on the table outside, walked to the dish room for "like 30 seconds" and came back to discover an empty table: "I immediately realized someone just walked by the front of the restaurant and just took it and ran away. Needless to say, I did not switch to that guy's company. I still blame him to this day. I won't mention any names, but they are not getting business at Graffiato. And he knows who he is, too. And he knows he owes me an iPad."

There have been quite a few thefts at Graffiato since opening day, as well. For starters, there are the pizza stands:

"One day I saw someone walk out with six of them in his hand. I said, 'What are you doing?' He was like, 'Oh, sorry.' I was very confused. I wasn't about to yell at him. ... And I just sort of awkwardly took them from him and he left and I put them back where they were supposed to be. And I was like, 'I don't really know what just happened there.'"

And Graffiato is yet another victim of those thieves who like to steal pig-shaped things:

"We have this little piggy bowl, and we filled it with peppermint saltwater taffy. ... Peppermints are a classic thing you get when you leave a restaurant and we twisted that into saltwater taffy to make it a little bit of the boardwalk. And not only did all the saltwater taffy disappear, but the bowl disappeared."

So what shit is left for you to steal? Horn has a few ideas:

1) "Mike has a little tin can for all of his tools on his station and he had us label it. It says, 'Don't fucking touch, per chef Isabella.' And it's out. If you sit at the pizza bar, you just see it in front of your face. And people have picked it up. I'm not sure of their intentions, but that's something that one day I would expect to be stolen."

2) "If someone walks out of here with my Berkel slicer one day and we don't notice, then that will trump all. You just took 150-pound, $5,000 slicer out of the restaurant in the middle of service. Well, you did it. Good job."

4) "The butcher bar upstairs, we have a bunch of cleavers that are hanging down. If some of those started disappearing, they'd be hard to replace because they're vintage 1930s kitchen knives. I expect at least one to go missing at some point."

5) "There's a lot of opportunity of theft in this restaurant. I don't know if that's a good thing to say. So please, come to Graffiato and walk by the dry storage pantry because it's in the middle of the restaurant and take whatever you want."

But then — a change of heart: "No, don't take our slicer, don't take our oven, don't take anything behind the bar, please. Don't take our Open Table computer at the front desk. And everything else that we like has already been taken, so I think we're good. We're sold out of things to steal. So stay home or come out and eat and be a normal person."

For more stories about shit people steal from Graffiato, tune into WAMU 88.5's Metro Connection on Friday at 1 p.m.

Please do not steal these cleavers from Graffiato [Photo: R. Lopez]