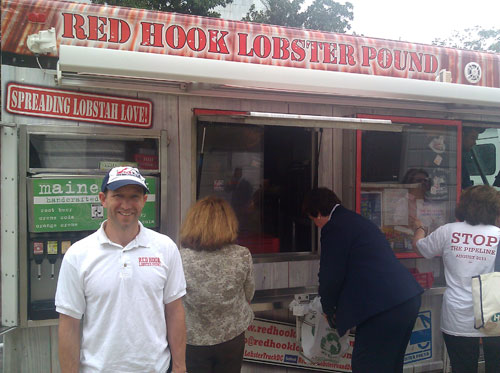 Red Hook Lobster Pound got its start as a sit-down place in Brooklyn, but DC's streets were the first home to the restaurant's mobile unit. It's been a little more than a year since Doug Povich brought his cousin's lobster roll concept to town, but the truck is just as popular as ever with a second truck and lines that still stretch around the block. Eater chatted with Povich about how he got the ball rolling, what the first day was like and things he's learned in the first year.

What made you guys decide to come down to DC?
My family is from Maine and DC, originally, and we also have family in New York where my cousin Susan Povich started the business about two and a half years ago. And she asked me about a year and half ago whether I was interested in expanding it down to DC. I said yeah. It's been a great opportunity for us to share the summer experience that we had growing up at our family house in Maine. Eating lobster rolls was just one of the things we always looked forward to every summer and we wanted to spread the love down the East Coast.

And how did you get the ball rolling?
I did a lot of research in terms of the regulatory situation in DC and found out that it was a lot easier to do it here than in New York where my cousin was. And she said to go for it. I checked out what goes into building a truck, buying a truck, building it, getting it set up, complying with all the DC regulations — size and parking and all that. And then since I have a full-time other job, I found a partner, Leland Morris, who was in the food service business, was a culinary school graduate. I asked him if he wanted to do something crazy like start a food truck and, surprisingly, he said yes. So he handles all of the operations and I kind of stand back and deal with new trucks and things like that.

Where did you find the truck?
We found it in Minnesota and from there it went to Ohio to get cut down to size because DC doesn't allow a regular, full-size truck. It has to fit in a parking space. And then it went from there to Texas and had the kitchen installed. Then it made its way back to DC. It was quite an adventure.

Is it the same as the truck in New York?
We had a truck here before my cousin had a truck in New York because regulations were easier. She now has a truck in New York and it's quite different, actually. In New York there's no real size restriction, so they can have a much longer, bigger truck. And there's also some differences in terms of where they can park. In DC, you can park basically at any legal parking space. I guess because they don't have a size restriction, their layout is much different on the inside of the truck. They can actually serve people from both sides of the truck. There's a lot of one-way streets, which makes that important.

Did you have any delays getting on the streets here?
We did just in terms of getting the truck built out in Texas. Since this was the first one, there was a lot of back-and-forth with the builder and some delays. Also, when we first arrived there were some mechanical issues with our brand new generator, which are things that you come to learn to deal with when you're in this mobile food business. We had hoped to come out in June and it ended up being August 19, which was kind of standard from what I hear from other trucks in terms of delays.

Where did you go on your first day?
Our first day, not knowing anything about where to go, we somewhat fortuitously ended up at Farragut Square, which turns out is the hottest spot in DC for food trucks. So our first day there we had people lined up literally around the block and there was about a two or two-and-a-half hour wait for lobster rolls on our first day. So we knew we were onto something or we were lucky. I think part of it was that we had talked to a lot of the food bloggers like yourselves and they were very interested in lobster because it was somewhat unique to the food truck scene.

Were you anticipating lines like that?
No, we absolutely were not anticipating anything close to those kinds of lines. And they continued through the winter, which was surprising, too. The snow, the cold, people were still standing out for a half an hour waiting for their lobster rolls. And it also allowed us to build our second truck much sooner than we thought.

How did that decision come about?
We were thinking over the winter that we're really onto something here. We had originally planned to go a full year with just the one truck and then we moved those plans up and started plans for the second truck in January of this year and got the truck built at a different location. In New Jersey this time. But still, Minnesota to Ohio to New Jersey for the second truck. And we ended up getting on the streets in May. So the turnaround on the second truck was much faster. And it has a little bit different design. We learned a few things.

What did you learn?
The layout inside is a little bit different. It's more of a galley layout and our crew members seem to like that a little bit better. There's a little bit more space, maybe 6 more square feet of standing room. It's still a cozy environment to work in. Some of the crew likes the original truck, some likes the other truck, so we didn't do too badly on our first attempt. Another thing that we learned was to have a larger generator so that it's not working at 80 or 90-percent capacity. It's more like 60 or 70 percent. And that allows it to have better longevity, fewer breakdowns, things like that.

Was staffing difficult?
Staffing actually has not been that difficult. We have a great crew. We're probably unique in terms of the numbers of crew members that we put on the truck, between four and five. Most other trucks operate with two or three. Our goal is to pump out as many rolls in a limited period of time as possible, and we've found that we need that many people to do it. But actually hiring people, [it] seems people really enjoy working with us. We're trying to be a little bit of a different environment than your typical restaurant. We like to think that we're progressive in terms of our employees. My wife Robin is a life coach and she does some creative things with inspiring our employees to improve themselves and interact great with customers. It's a fun place to work and it makes it easy to hire people.

And have you gotten any flack from police or other trucks?
Never from other trucks. The DC food truck community is a pretty close-knit group. We've formed an association, the DC Food Truck Association. I'm on the board of directors of that. We have about 34 members now and a code of conduct. So we meet a lot and we all get along really well.

What kinds of regulations?
We're not allowed to stop at a location unless we have a line that's already formed, which is why an ice cream truck rings its bell. We also have to leave once the line ends, same ice cream truck rule. Those regulations really don't work well for a gourmet food truck that has, in many cases, equipment that needs to cool down in order to move safely, like deep fryers. We don't have that, but other trucks do. So we're working with DCRA to rationalize those regulations in a way that makes sense for food truck operators.

Do you have any crazy breakdown stories?
Probably within the first week of operations we were at McPherson Square and we were getting ready to serve. We had maybe 50 people in line and the generator just dies. And we try and try to get it restarted and it won't start. So we ended up just giving out free whoopie pies to everyone who was in line and said, "Sorry, these things happen." Everybody was really great about it. That was probably the most shocking one, right at the beginning of our business, learning how to deal with that stuff. We've gotten much better with breakdowns and service and maintenance. It's much easier when you have two trucks, frankly, because if one's out of service you can still at least get to one location each day.

What's one piece of advice you'd give to someone who's thinking of starting a food truck?
One piece of advice would be to think very carefully about what you're going to sell. Because if you're coming from a restaurant environment and you think you're just going to be a restaurant on wheels and serve many different things, it's a challenge. It's a way bigger challenge given the limited size that you have on the truck. So we've focused on doing a few things really well. It helps in terms of stocking the truck and it translates well to the mobile environment. Whereas if you have 15 items and have to try to stock that and guess how many of each product people are going to buy, you're going to end up at the end of the day with excess product. It doesn't usually work too well. The other thing is don't underestimate the challenges associated with running a mobile food kitchen. They are many. There are, I would say, more challenges in many ways than a regular restaurant.

Does it feel like it's been a year?
No, actually. It's gone by really quickly. We're just excited that people are still lining up a year later to sample the product. We're very also happy about the things that we've been able to do for the community in terms of giving back, making donations to the DC Central Kitchen and Miriam's Kitchen. The Food Truck Association is actually involved in a non-perishable can drive that will happen next Friday at Truckeroo [and] this Friday at Farragut Square. So it's really fun to be a part of a great group of small businesses that are trying to do the right thing by the city and the citizens of DC.