Renovations to the street level of Asylum began this summer and tonight the resulting barbecue, bourbon and beer-friendly restaurant Smoke & Barrel is finally ready to be unveiled to the public. Eater took a peek inside the space, all exposed brick and wood: the bar is built out of ceiling beams from a DC rowhouse and wood lining the walls is all mushroom board reclaimed from Amish farms. Bar stools made out of old barrels reinforce the beer-and-bourbon theme in the restaurant's logo.

Smoke & Barrel has got about 25 beers on draft and another 25 in cans, while the whiskey list takes up an entire page of the drink menu with Kentucky bourbons, rye, Scottish, Irish and more. They've also got short list of beer-whiskey cocktails like the Scotchy Scotch Scotch, which combines Glenfiddich and Old Chub.

Word to the wise: Smoke & Barrel is kicking off tonight's grand opening at 5 with a 30-liter oak keg propped on the bar, tapped and poured by gravity. 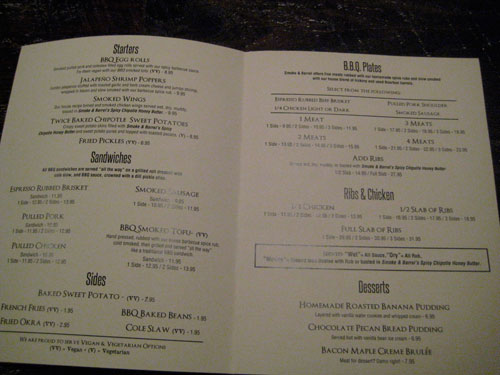