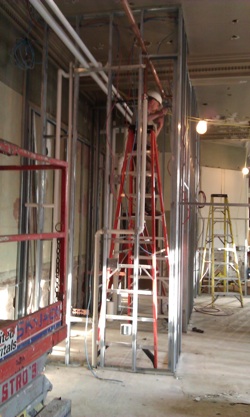 1) College Park: The Washingtonian checks in on Fishnet, a casual seafood restaurant headed to College Park. Final inspections have delayed the opening, but the menu is already more or less set, full of fish sandwiches, lobster rolls and fish tacos. [POST-PLYWOOD]

2) Chinatown: PoP notices some temporary signage has gone up for the Fuel Pizza location in Chinatown. Last week, though, the interior looked like the picture to your right, so it's safe to say this is not opening right away. Presumably the pizza chain's K Street location is in a similar stage. [PLYWOOD]

3) Clarendon: LeoNora Gourmet Bakery is opening up its storefront in a few weeks on what ARLnow calls "Clarendon’s grungiest block." The bakery has been around for awhile in delivery form, but this will be its first retail store. [PLYWOOD]

4) U Street: U Street Girl notes that there is finally some progress at the space that will eventually house the Smucker Farms retail space on 14th Street. The exterior has been painted and they've posted a building permit. [PLYWOOD]

5) Bloomingdale: Prince of Petworth has an update on Bacio Pizzeria, whose opening has been a bit delayed. But apparently they are now just waiting on their certificate of occupancy and could open as soon as a month from now. The owner also tells PoP that at first they'll be serving pizza and salads only, but could eventually add on delivery and pizza by the slice. [PLYWOOD]

6) Woodley Park: Prince of Petworth reports that Noodles & Company has applied for a liquor license that indicates it will be serving "global noodles dishes, salads, and desserts" with a small amount of sidewalk seating. [PLYWOOD]

7) Crystal City: ARLnow has it that