Share All sharing options for: A Look Inside District Commons, Opening Tonight

This morning brought your sneak peek inside the brand new Burger, Tap & Shake fast-casual burger concept from restaurateur Jeff Tunks and his Passion Food Hospitality group. But what about that large, shiny restaurant next door? That's District Commons and it opens tonight to the general public. This self-styled American tavern from the people behind PassionFish, Acadiana, the late Ten Penh and more aims for both modern and classic, informal yet elegant, all-American and, above all, approachable in its design and menu — a lot of goals, to be sure.

But all-American is the main theme for District Commons, which pays homage to the city we live in not only through its name but also murals in the dining room that depict the District in the 30s and 40s. Red is an accent color used throughout the expansive restaurant, which seats 185 in its dining room and more in the bar and lounge. Custom booths are divided by translucent curtains and line the glass walls that make this space especially bright. There's a distinct separation between the dining room and the lounge — split by an eight-top table that has a perfect view into the already open kitchen. The lounge has high-tops and plenty of seats around the bar, above which sits two flat-screen TVs. They left out a third TV that would have faced the dining room in order to keep the bar and dining experiences separate.

And what can one order from the bar? Well, in keeping with the theme, mostly American beers, wines and liquors. There are 20 drafts (including DC Brau), 30 wines by the glass and — oh hey — 99 bottles of beer on the wall. Every night at 10 p.m., food service switches over to the bar, where District Commons will be offering a rotation of daily specials like meatloaf Mondays and a Ten Penh Night on Thursdays that brings back the shuttered restaurant's Ting's Thai Bento Box.

As for the rest of the menu, well, both lunch and dinner feature a raw bar, flatbreads, mussels served in crockpots and they share a variety of entrees like the grilled salmon with parsnip puree. The lunch menu has a daily list of sandwiches that include a lobster roll, pork tenderloin and an oyster loaf, while the dinner menu has roast duck, NY strip steak and lamb chops. They're pickling their cherries in-house and will serve charcuterie on boards shaped like pigs. Both menus have a "burger" made from barbecue-braised shortribs to differentiate it from the fast-casual burgers at BTS next door — which, by the way, connects to District Commons through a narrow hallway where you will also find the restrooms for both restaurants.

Like BTS, the opening hours of District Commons may not be entirely predictable. But as of yesterday, Tunks said the restaurant will be open tonight and tomorrow for dinner only. It will close again on Sunday to regroup and then we'll see what next week brings in terms of its opening hours. Eventually, the plan is to add on a breakfast service, too. 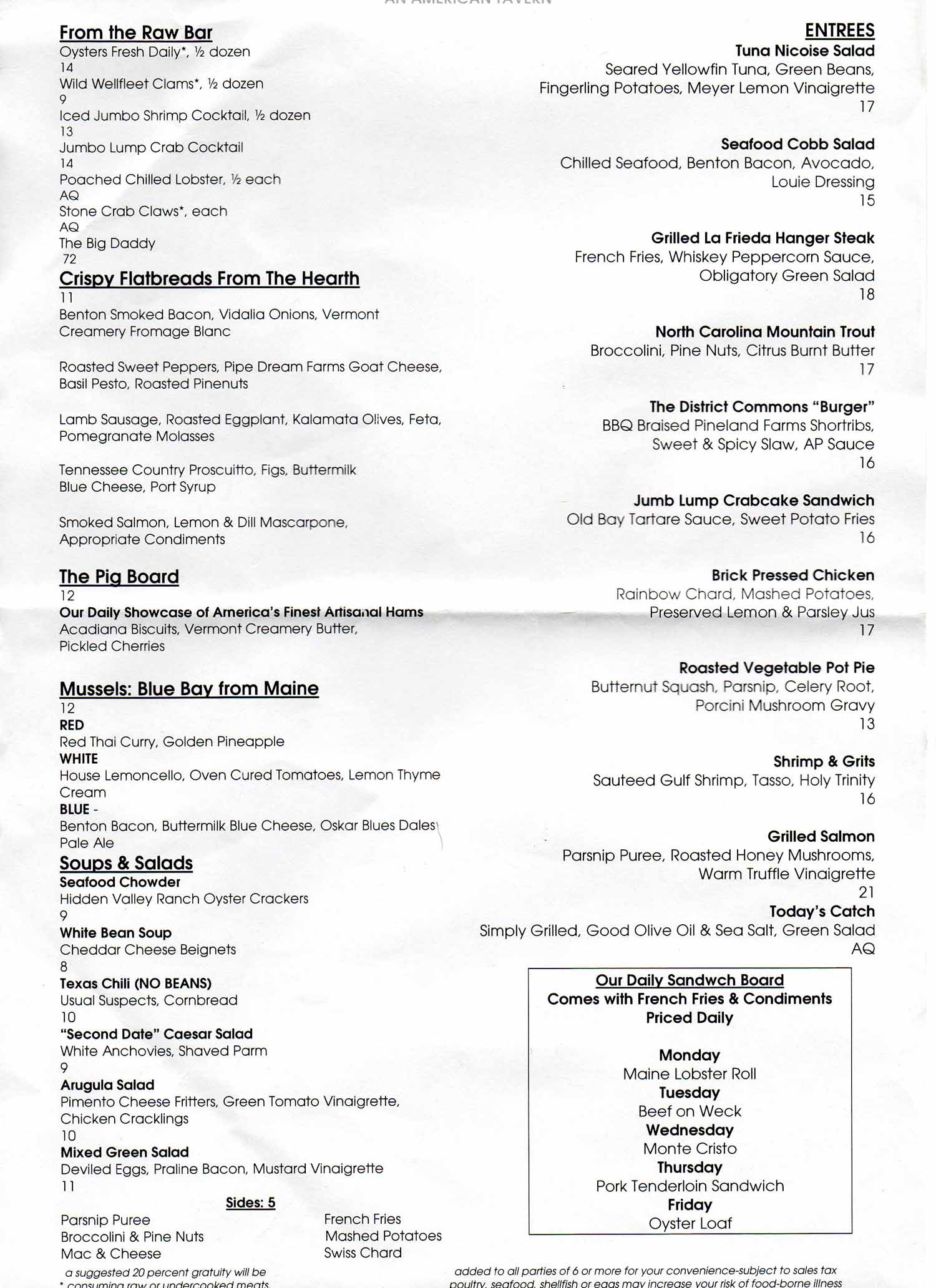 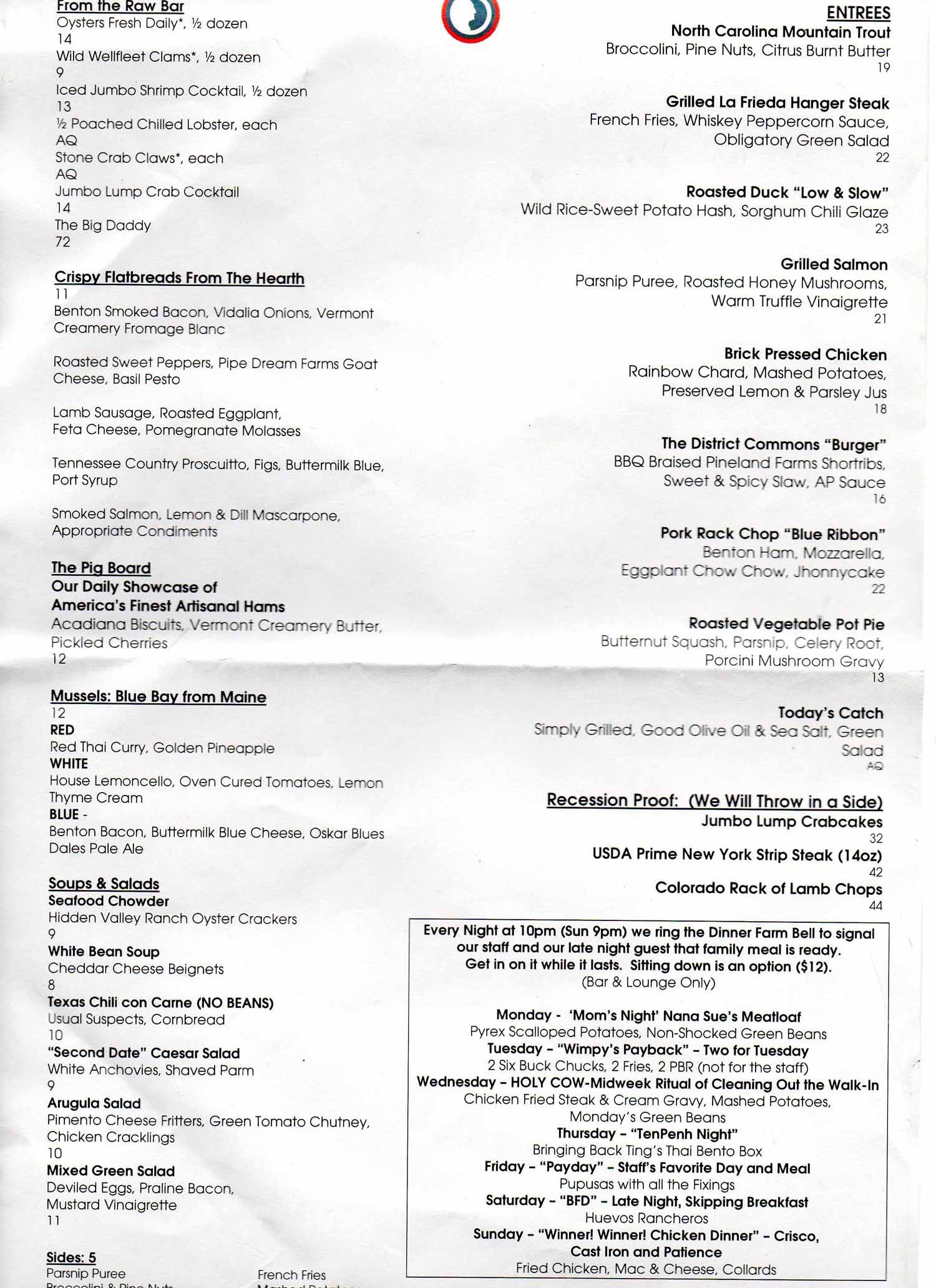