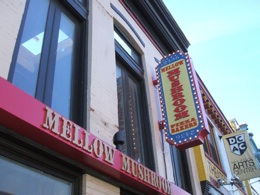 1) Logan Circle: Restaurateur Jeff Black's crew has been hard at work on his new place, Pearl Dive Oyster Palace, for weeks now, and the restaurant is most certainly getting close to its opening. In fact, the restaurant will be open for a sneak peek (to those willing to pay for it) on Saturday with a pre-opening party to raise money for juvenile diabetes. Tickets are $30 in advance for the 6 p.m. party or $40 at the door, which includes food but not booze. U Street Girl has a hazy shot inside the restaurant if you want to see what you're getting into. [POST-PLYWOOD]

2) Dupont Circle: Examiner.com has some good news for the West Coasters among us, namely that LA's Coffee Bean & Tea Leaf is coming to DC after having just opened a branch in New York. The DC location will be found in the lobby of the Washington Hilton, "opening fall 2011." [PRE-PLYWOOD]

3) Adams Morgan: And now, as you can see, the signage is officially up for the Mellow Mushroom en route Adams Morgan. They are also hiring and the target opening date has apparently slid back to early October. [PLYWOOD]

4) Atlas District: Prince of Petworth hears on the Twitters that a new seafood restaurant named Da Luft is on its way to H Street, now applying for a liquor license. [PRE-PLYWOOD]

5) Columbia Heights: Remember that new coffee shop making its way to 14th Street? New Columbia Heights gets an update from the Coffy Cafe owner, who says they're starting the buildout soon — "electrical and plumbing within the next couple of weeks." She projects a November opening. [PLYWOOD]

6) Pleasant Plains: PoP spots a liquor license application for a jazz lounge serving soups and sandwiches on Georgia Avenue. Its name? The Enterprise, which we can only hope will lead to lots of Star Trek jokes. [PRE-PLYWOOD]

7) Ballston: ARLnow has a look inside Zoe's Kitchen, the Greek-inspired restaurant heading to Fairfax Drive. Construction is underway and the general manager tells the blog that they're hoping to open on September 15. [PLYWOOD]